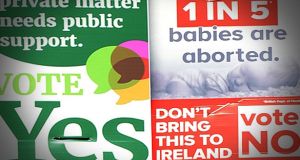 Margaret McGeehan, chair of Donegal Pro Life, has asked principals that students be shown or given access to the “Keep the 8th” video, “in the interest of a balanced debate”.

Secondary schools in Donegal have been asked by an anti-abortion group to show a graphic video to senior students ahead of the May 25th referendum on the Eighth Amendment.

On Thursday, Donegal Pro Life sent emails to schools across the county, asking for principals and religion teachers to direct students to view a video produced by the group.

The video, including several graphic images of aborted foetuses, and an illustrated demonstration of abortions at various stages of pregnancy, claims that abortions heighten women’s risk of suicide and medical complications.

In an email seen by The Irish Times, Margaret McGeehan, chair of Donegal Pro Life, asked principals that students be shown or given access to the Keep the 8th video, “in the interest of a balanced debate”.

The 50-minute video is a “a good source of factual information” and “suitable” for over-16s, she said, adding that it is “particularly important” that over-18 students see it “before making up their minds”.

However, John McGuirk, spokesman for the Save the Eighth group advocating a No vote, said his group has “not sought to campaign in schools” during the referendum.

“Nor do we think it is appropriate for teachers, or any other authority figures with power over young people, to be seeking to influence their students’ votes,” Mr McGuirk said.

Ailbhe Smyth, co-director of the Together For Yes umbrella repeal group, said: “It is not our policy to canvass, set up information stalls, circulate literature or video content relating to our campaign in, at or near schools.

“We don’t believe that the use of graphic imagery is appropriate and we don’t think that the public welcome this type of campaigning, be it on posters, leaflets or in video form.”

However, Ms McGeehan said the graphic imagery in the video is well-flagged beforehand, and it was up to school principals and boards of management to decide to show the content.

“How can you tone down something so horrible?” Ms McGeehan said. Sixth-year students “need to have all the information before they vote”, she told The Irish Times.

Donegal Pro Life is not registered as a “third party” with the Standards in Public Office Commission, a requirement for groups campaigning in the referendum, who accept donations.

The Department of Education said it would not be “normal practice” to issue schools with guidelines ahead of a referendum, and the department had no plans to do so, said a spokesman.