Alan Mangan to stand for Labour in Longford-Westmeath constituency 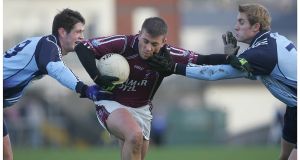 Alan Mangan: member of Westmeath team that won the Leinster Senior Football Championship in 2004 is confident qualities that made him a success on the sporting field can be transferred to politics. Photograph: Alan Betson

The former GAA star selected by Labour to contest the next general election in the Longford-Westmeath constituency says he is confident the qualities that made him a success on the sporting field can be transferred into politics.

The party’s new candidate for the constituency is Alan Mangan, who was a member of the Westmeath team that won the Leinster Senior Football Championship in 2004. He also played with the Westmeath senior hurling team.

A native of Castletown-Geoghegan and a married, father of three, Mr Mangan (39) is a community-based health worker in the Community and Alcohol and Drugs Service.

Speaking after his candidacy was confirmed at a selection convention in the Mullingar Park Hotel last night that was attended by party leader Brendan Howlin, Mr Mangan said the counties of Westmeath and Longford “face big challenges”.

“Too often we are the forgotten midlands, the places that you drive through on the way to somewhere else . . .There are too many people without a home, too many people worried if they’ll have enough work, and enough left to pay the bills. Too many people who need someone in Dublin to fight for them. I want to be their voice.

“As a proud GAA man, I know the importance of building a strong team and leading on the pitch, working together, putting in long days and nights training. That’s why the work starts tonight.”

The vacancy on the Labour Party ticket in Longford-Westmeath was brought about by Thursday’s announcement by Deputy Willie Penrose that he will not be contesting the next election, more than a quarter of a century after he entered national politics following the Spring Tide election of 1992.

At the well-attended convention, Mr Howlin paid tribute to Mr Penrose, describing the former super junior minister, who resigned from government in November 2011 in protest at the decision to close Columb Barracks in Mullingar, as the “embodiment of integrity, of honour, of service and of patriotism”.

Shane Ross’s ‘naked attention-seeking’ was with us all week