Varadkar battered from all sides on Brexit, migration and Syria 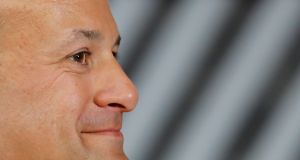 Taoiseach Leo Varadkar was criticised by opposition deputies for his approach to Brexit, the migration crisis, European Union military co-operation, the Syrian conflict and a subservient attitude to the EU during Dáil statements on the recent EU summit.

He also criticised what he called the hijacking of the EU’s agenda by the incoming Austrian presidency, noting that chancellor Sebastian Kurz “has decided to make migration the number one issue for the council in the next six months, announcing that there will be a special summit in September solely on migration”.

“It appears that the Taoiseach didn’t have time to oppose this hijacking of the EUs agenda by the far-right, but he did have time to take a selfie with Mr Kurz, ” Mr Martin said.

Labour leader Brendan Howlin warned Irish issues would become “sidelined” at the October summit and urged the Taoiseach to “seek a special summit of EU heads of government in September to copperfasten the Irish Border agreement before the October council meeting is asked to sign off on the whole agreement with the UK.”

Mattie McGrath criticised the Government’s attitude to the EU. “I call it ‘lick something that starts with an A’,” he said.

Solidarity TD Paul Murphy criticised the “what is now a galloping pace of militarisation of the EU”.

“Civilians whose lives have been destroyed by war are paying the price for the rescue of the European banking system in 2010. That is the grubby, despicable reality of geopolitics,” Ms Daly said.

Both said they had visited Syria last week to see the situation on the ground and were critical of what they said was EU support for Syrian rebels.

“Six years on not a single area that has been taken over by the rebels has any form of democracy control. They are religious jihadi, run by religious courts and bearded men primarily from other countries. People’s freedoms disappeared,” Ms Daly said.

“Deputy Boyd Barrett can talk about the crimes that Russia perpetrated in Syria, but I defy him to travel there and ask the people what they think about the Russians. In many cases, they think the Russians are heroes.”