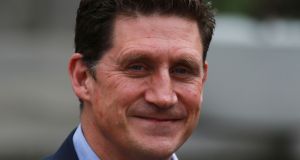 Fine Gael and the Independent Ministers in Government have been accused of having “one of the worst environmental records” in Irish politics and of “shaming our country”.

Green party leader Eamon Ryan said Ireland’s reputation on environmental issues “is in the doghouse” and added “I am sorry for insulting dogs.

“We are in the dog house in terms of how we are seen with regard to climate. That is not fair to the people.”

He hit out at Ministers who he said “seem to be itching for an election” and all he could hear was the Government “playing political games for its own advantage rather than thinking of the national interest”.

Mr Ryan said if the Government was thinking of the national interest, “it would stay the course for another year”, and bring in measures to deal with climate change, including legislation to ban any further oil and gas exploration and the Waste Reduction Bill.

The Dublin Bay South TD also hit out at civil servants who were still saying that “gas is good and we should be looking for more of our own oil”.

He was speaking during a debate in which the Dáil agreed to establish an Oireachtas committee on climate change.

Mr Ryan said the new committee should hold its first meeting next week, get its research in place, call in the expertise of the universities and then “bring in the seven key secretaries general, call them to account regarding what their Departments are going to do”.

Earlier, Independent TD Danny Healy-Rae, a climate change denier, said the committee would only be a talking shop, the Government would provide millions for climate change but it would be the farmers and workers who paid for it.

He said “the Minister has no leprechaun” with a pot of gold.

The Kerry TD added that “when the weather is wet or rainy, the scientists are blaming what we are doing on this earth for causing it to rain. Likewise they are blaming people now for the fine weather as well.

“The facts are that since 1850, since what was known as the little ice age, the temperatures have risen by less than one degree.”

Independent TD Thomas Pringle said there had to be fair and appropriate burden sharing, pointing out that “larger farmers and factories produce phenomenally more carbon emissions than small-scale farmers”.

But Minister for the Environment Denis Naughten staunchly defended the Government’s actions and said “one in every five euro in capital investment this Government will spend over the next decade will have a climate focus. That is significant. It is significant in European and global terms.”

He said the State had a lot of work to do but insisted that “we will be the first country in Europe to introduce a ban on smoky coal from September 2018”.

The State “will spend €4 billion on energy efficiency upgrades. In the next 200 months [more than 16 years], we will take dirty fossil fuels out of our heating systems”.

And he said “we will be the first country in Europe to ban the sale of new fossil fuel cars from 2030”.