Internment explained: When was it introduced and why?

Operation Demetrius began at the height of the Troubles 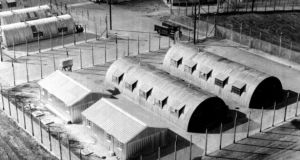 Huts at Long Kesh internment camp back in 1971

Internment without trial, called Operation Demetrius, was introduced in Northern Ireland by the Stormont unionist government early on the morning of August 9th 1971.

It involved mass British army arrests of more than 340 people from Catholic and nationalist backgrounds.

The then unionist prime minister Brian Faulkner said it was designed to smash the IRA. Approval for internment was given to Faulkner by the British Home Secretary Reginald Maudling who was said to be unenthusiastic about the move but feared a loyalist backlash if the did not act.

The intelligence used in making the arrests was seriously faulty and scores of people ended up detained who had no connections with the IRA. Of those arrested more than 100 were released within 48 hours.

Most unionists supported the move at the time although the Rev Ian Paisley opposed it because he was concerned some loyalists would be interned.

Internees were held at the new Long Kesh camp near Lisburn, later known as the Maze Prison, Magilligan British army camp in Co Derry and on the Maidstone ship in Belfast Harbour.

Internment prompted serious violence. Over August 9th and 10th 23 people died including the ten people who died in the Ballymurphy Massacre in west Belfast.

The swoops caused huge Catholic and nationalist alienation from the unionist state and also served as a recruitment boon for the IRA, just as Bloody Sunday did six months later in Derry.

Fourteen of those arrested, the so-called Hooded Men, were subjected to what was euphemistically named “interrogation in depth”.

This involved the so-called five techniques: wall-standing, hooding, subjection to white noise, sleep deprivation and deprivation of food and drink. It was further alleged that some of the men were made to believe they were being ejected from helicopters from hundreds of feet in the air when in fact they were thrown to the ground from a relatively short distance.

As a result of the violence following from internment the Irish Government set up five camps to accommodate families of internees and refugees from the Trouble.

Almost 2,000 people were interned up until its ending in December 1975. it is estimated that just over 100 were loyalists, with the first loyalists interned early in 1973.

The annual commemorations of the introduction of internment, which included the tradition of bonfires, regularly led to serious violence and disorder in Northern Ireland. In 1988 Sinn Féin was involved in establishing the annual and successful West Belfast Féile an Pobail to try to steer people away from such violence.