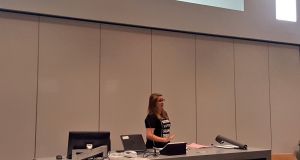 Síona Cahill, president of the USI, speaks at the Emerging Ireland summer school.

Complacency is the biggest challenge facing young people involved in politics, despite the successful referendum to repeal the Eighth Amendment, the head of the Union of Students in Ireland (USI) has said.

Síona Cahill, president of the USI, said it was “not necessarily the case” that young people who voted in favour of liberalising Ireland’s abortion laws would remain politically engaged.

Ms Cahill was speaking at a new political summer school, Emerging Ireland, which was held in University College Dublin on Friday and Saturday.

“We see numbers like 87 per cent of 18- to 24-year-olds voted Yes during the repeal campaign, but are those 87 per cent also going to come out when it comes to representational politics?” she said.

In May a referendum to remove from the Constitution the Eighth Amendment, which gave an unborn foetus and the mother an equal right to life, effectively banning abortion, passed by a two-thirds majority. Legislation to follow the vote will introduce access to abortion without restriction up to 12 weeks into a pregnancy.

Ms Cahill, the keynote speaker at the school, said she was the seventh female president of the USI, an organisation that was 60-years-old. “The reality is most people don’t see that as a problem,” she said.

It would be difficult to galvanise the engagement seen among young people during the abortion referendum on other social issues such as homelessness and ending direct provision, she said.

“Young people and millennials are in a position where they are blamed for eating too many avocados and not being able to afford mortgages,” she said.

“Regardless of whether we are personally homeless or not, we are in the middle of a housing and homelessness crisis,” she said. “It’s about making those things that would not seem relevant to you as a person relevant because they affect so many people around you, and it is your duty to get involved and do something about it,” she told the audience.

In late June the MacGill Summer School kicked off a moderate storm on social media over the initial lack of female speakers on the event’s panels.

While many took to Twitter to lambast MacGill, labelling the established Glenties event as overly “male, pale, and stale”, Ms Power and Mr Nugent decided to organise an alternative politics summer school.

Put together in six weeks, the Emerging Ireland school held several panel talks, with speakers drawn from outside the traditional political circuit of guests.

Panel topics included the housing crisis, what the next big social issue would be post-repeal of the Eighth Amendment, climate change, whether millennials were killing the economy, and the future of the media in an era of fake news.

The organisers hope to run the event on a larger scale next year, and make the alternative summer school a permanent fixture.