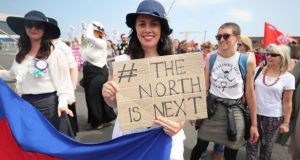 Abortion remains illegal in Northern Ireland including in the cases of rape, incest or fatal foetal abnormalities making it one of the most restrictive systems in Europe. File photograph: PA Wire

Women from Northern Ireland will be able to access abortion services in the south when the regime is introduced here, the Government has pledged.

Speaking at an event in Belfast on Tuesday night, Minister for Health Simon Harris outlined his belief that the current ban on abortion that exists in Northern Ireland should be addressed in the near future.

Abortion remains illegal in Northern Ireland including in the cases of rape, incest or fatal foetal abnormalities making it one of the most restrictive in Europe.

Terminations are only permitted when “it is necessary to preserve the life of the woman, or there is a risk of real and serious adverse effect on her physical or mental health, which is either long term or permanent”.

In 2017, 919 women from the North travelled to England or Wales to access a termination of their pregnancy.

It is not known how many women have purchased abortion pills in the North. However, in 2016, a Northern Irish woman pleaded guilty to inducing a miscarriage after buying pills online at the age of 19 and was given a three-month suspended sentence.

Mr Harris said this was a reality politicians in Northern Ireland needed to address as a matter of urgency.

“In the meantime, I intend to ensure women from Northern Ireland can access such services in the Republic, just like they can access other health services here,” he added.

The referendum to repeal the Eighth Amendment of the Constitution was passed in May, but legislation to give effect to the decision has yet to be introduced.

This is due to a number of legal cases taken against the result. In recent weeks, two separate applications for permission to bring petitions were refused by the High Court.

The Government has committed to introducing legislation to allow women access a termination within the first 12 weeks of their pregnancy from January 1st 2019.

Abortions will also be accessible if a mother’s life or health is at risk, or in the cases of a fatal foetal abnormality.

Mr Harris said a woman’s right to access health services in crisis pregnancies should not be hindered by the border.

Legislation would be introduced in the autumn in the Oireachtas to legislate for abortion services and there will be provision made for women from the North, he said.

Before Stormont collapsed, in January 2017, five motions had been brought forward to the Assembly on same-sex marriage. However, an Assembly vote in favour of extending civil marriage rights to same-sex couples was vetoed by the DUP using the petition-of-concern blocking mechanism.

The Minister made similar calls for marriage equality to be introduced in the North.