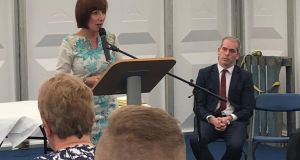 Political parties may need to introduce gender parity in selecting election candidates if they do not reach that target naturally, the Minister for Culture, Heritage and the Gaeltacht Josepha Madigan has said.

Ms Madigan said she is in favour of higher gender quotas than the minimum 30 per cent figure brought in by the government for political parties in the State. Parties that fail to reach that threshold receive less State funding.

Speaking at the opening of the Parnell Summer School in Avondale, Co Wicklow, Ms Madigan said the timeframe to reach a 40 per cent threshold by 2023 should be speeded up.

She said political parties should aim for a 50:50 split in terms of candidate selection naturally, but if that does not happen “serious consideration” should be given to increasingly the existing quota threshold from 30 to 50 per cent.

The last Fine Gael government introduced gender quota legislation. This obliged all political parties to have women making up at least 30 per cent of their candidates or risk having their State funding cut by half, she said.

“I know that, as things stand, Fine Gael is almost at the 30 per cent mark in its selection of general election candidates.

“However, in my view, we need to give serious consideration to raising this bar higher and we need to do it urgently.”

“It is not that women are better or worse than men but we do bring a different perspective, a perspective that is sorely needed in our representative institutions of State. We know from experience that diversity of opinion leads to better decision-making,” she said.

Reflecting on the centenary of the 1918 British general election in which Constance Markievicz became the first woman MP and later TD, Ms Madigan said full equality has not been achieved in the State 100 years on.

“We must take up the mantle once worn by Markievicz and so many inspiring women like her and work to ensure that our progress continues,” she said.

“Out of almost 4,500 seats filled in Dáil Éireann between 1918 and 2009, less than 5 per cent have been taken by women. Only 22 per cent of the current Dáil is female while the Seanad fares slightly better with 32 per cent female representation.

“Indeed, I’m only the 19th female cabinet minister since the foundation of the Irish State and the first ever female solicitor to sit at cabinet.”

Ms Madigan also called for a straight repeal of Article 41.2.2 of the Constitution which states that the State shall “ensure that mothers shall not be obliged by economic necessity to engage in labour to the neglect of their duties in the home”.

Ms Madigan said it was not a “harmless relic of bygone thinking” but one which “fundamentally shaped women’s position in Irish society”.

She explained: “The low percentage of women in leadership positions in politics, in business, in sport, in the arts all stem from the presumption that held sway for decades that the woman’s rightful place was in the home.

“Those norms suggested that the woman who sought a role outside the home was somehow ‘abandoning her duties’ in the home. Whether we like it or not, whether we wish to acknowledge it or not, women were hobbled for decades from being free to choose how they wish to live their lives.”

The Government has promised a referendum to repeal Article 41.2.2 of the Constitution which is scheduled to be held on October 25th with a presidential election if there is one.

Some have suggested that the wording of Article 41.2.2 should become gender-neutral and recognise the role of carers in Irish society.

Ms Madigan said such a move would be “premature” and added: “The issue of care warrants consideration in its own right, consideration that will adequately encompass the diversity of carers and those for whom they care.”

Ms Madigan said she favoured legislation and regulation of social media outfits. It was not enough, she stated, to allow companies such as Google and Facebook regulate themselves.

“The time for self-regulation by social media platforms is over. The integrity of our democracy should not be dependent on the decisions of these companies,” she said.

“I support the recent call by the Standards In Public Offices Commission to establish an electoral commission to deal with digital political campaigns financed from outside the State.”

The Parnell School takes place between Sunday and Thursday in Avondale. The theme is Democracy Triumphant? and marks 100 years since the British general election of 1918.

1 Joe Biden does not want to see guarded Border in Ireland after Brexit
2 Bloomberg ranks New Zealand top in fight against Covid-19 - but how did Ireland fare?
3 Stir-crazy Dutch holidaymakers set to descend on Caribbean island
4 Shops, hairdressers and hotels expected to reopen next week
5 Covid-19: Museums, cinemas set to reopen next week as Varadkar warns of New Year restrictions
Real news has value SUBSCRIBE