Yes vote shows overwhelming desire for change that nobody foresaw

Old assumptions about the urban/rural divide proved to be wrong 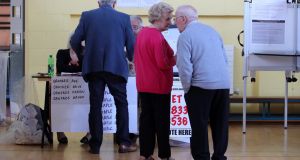 The victory for the Yes campaign looks set to be neither narrow nor based on a few segments of Irish society. Rather, it will be carried high on the shoulders of a majority across the entire country. Photograph: Colin Keegan, Collins Dublin.

The findings of The Irish Times/Ipsos MRBI exit poll, if borne out when the result of the referendum to repeal the Eighth Amendment to the Constitution is announced, illustrate an overwhelming desire for change that nobody had foreseen.

The victory for the Yes campaign looks set to be neither narrow nor based on a few segments of Irish society. Rather, it will be carried high on the shoulders of a majority across the entire country.

Aside from the thumping majority in favour of repeal, the most striking aspect of the exit poll is the uniform strength of the Yes vote across all regions and ages, except voters aged above 65.

In all, 68 per cent are in favour of Repeal, with 32 per cent against. In Dublin, 77 per cent voted Yes; 66 per cent in the rest of Leinster; 66 per cent in Munster and even 59 per cent in Connacht/Ulster, traditionally seen as the most conservative region of the country.

Campaigners on both sides reported back from canvasses that the old assumptions about the urban-rural divide would be proved wrong, but even then such predictions were based on No still winning in rural Ireland. The change from the past was to be that the pro-choice vote would be a larger minority, but would still be a minority.

There are still regional variations in this exit poll, of course, but the differences will be measured between the ferocity of the landslides reported from all corners of Ireland.

The anecdotal evidence from polling stations on Friday was that younger voters were turning out in large numbers, but the strength of this vote is not theirs alone.

This referendum does not represent an uprising of the young against an old Ireland; it is a fundamental rejection by the entire country of what has gone before; the final casting off of old mores.

The country has not divided down the middle on the most contentious social issue of all but has moved decisively into the European mainstream.

Concerns about the enthusiasm of men now seem misplaced, too: 65 per cent of all men voted for Repeal, just below the 70 per cent of women who said Yes.

When the result is confirmed, the focus will turn back to the Oireachtas, now given the power to legislate for abortion. The Government is proposing to allow for terminations up to 12 weeks of pregnancy and both Taoiseach Leo Varadkar and Fianna Fáil leader Micheál Martin have said they expect the Oireachtas to respect the will of the people.

Their messages were aimed at a handful of TDs who have said they will seek to amend or oppose the Bill to allow for unrestricted terminations within the first trimester.

Some of these deputies will argue that the referendum was to only give power to the Oireachtas to legislate for abortion as it sees fit, and they, as TDs, should continue to make their arguments as legislators.

But the public was not voting in the dark. The proposal to allow for abortions up to 12 weeks was a central part of the debate, even though it may have been downplayed by advocates for Yes.

Perhaps a new fear among a small group of TDs of a backlash from voters who chose Repeal will now outweigh any desire to curry favour among those who opted to keep the status quo.

Surely, on such a large projected margin of victory, the war has been lost. There is no need for yet one more battle.