RTE presenter Claire Byrne had to ask members of the audience to 'refrain from calling people liars' after many heated exchanges between audience and panel members. Video: RTE 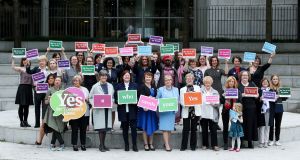 The National Women’s Council of Ireland (NWCI) launch of its “Who needs your Yes?” campaign in Dublin. 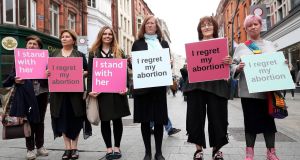 Women from the group Women Hurt gather on Grafton Street, Dublin, to call for a No vote. Photograph: Brian Lawless/PA

Today’s Irish Times/Ipsos MRBI poll shows 44 per cent of voters intend to vote Yes in the referendum on the Eighth Amendment, 32 per cent intend to vote No, with 24 per cent not expressing an opinion or not planning to vote.

This poll was conducted on Monday and Tuesday of this week among a nationally representative sample of 1,200 eligible voters and provides a measure of voting intentions as we enter the final week of campaigning.

The Yes vote has declined by five points (from 63 per cent) since our April poll. It has been the pattern in previous referendums that as polling day draws closer, the gap between the two sides narrows. With more than one week still to go, we can reasonably expect the gap to narrow further, although the extent to which it will close is impossible to predict.

While Dublin continues to strongly support repeal, with 68 per cent intending to vote Yes (an increase of two points since our last poll), support for repeal has declined in all other regions. The largest drop in support for the Yes side was recorded in Munster, down 10 points to 55 per cent.

In the Connacht/Ulster region, the vote is now split, with the proportion in favour of repeal at 51 per cent, a decline of seven points since our last poll.

Support for a Yes vote in urban areas remains robust (at 62 per cent, down four points), however opinion is more divided in rural Ireland with 52 per cent in favour of repeal and 48 per cent (up four points) against.

Brianna Parkins on The Women's Podcast

Voting intentions continue to be correlated with age – those aged 49 or younger are strongly in favour of repeal (68 per cent Yes) and those aged 65 and older are firmly against (60 per cent No).

It is interesting to note that enthusiasm for repeal among the youngest cohort (18 to 24s) has dropped by 18 points to 67 per cent: still overwhelmingly in favour of change but a significant drop since campaigning began. The baton has been passed from the 18 to 24s to the 25 to 34s who are now the strongest advocates for a Yes vote, with 70 per cent in favour of repeal.

In Ireland, the subject of abortion has always been sensitive, both socially and politically. Anecdotally, voters are not inclined to debate the issues or share their voting intentions with colleagues, friends or even family. When respondents were asked if they had noticed a reluctance to discuss the referendum, a sizeable 42 per cent said they felt people were less than comfortable sharing their opinions. This discomfort was more apparent to No voters (43 per cent) than Yes voters (37 per cent).

Perhaps this lack of comfort stems from the conflict of emotions and opinions revealed when voters are asked about their attitudes towards abortion and the legislation that is likely to follow a Yes vote.

This conflict is most apparent among Yes voters, over one-third (34 per cent) of whom agreed with the statement “I agree the law needs to be changed but I think the proposal for abortion on request up to 12 weeks goes too far”.

Conflict is leading to compromise. The majority of Yes voters (69 per cent) agree with the statement “I have reservations about providing abortion on request up to 12 weeks but also feel it is a reasonable compromise and will be an improvement on the current situation”.

Perhaps these reservations are behind the fall in the Yes vote since the end of April. No voters appear far more comfortable with their decision – 85 per cent agree with the statement “I feel abortion is wrong and should not be made more widely available”.

The outcome of the referendum will be decided in just over one week. Inevitably today’s findings will be used to extrapolate the final outcome. Clearly public opinion is not fixed and the recent shift in voting preference suggests there will be further movement between now and polling day.

On the face of it, a lead of eight points is a comfortable lead, especially when the decline has only been five points since the beginning of the campaign. However, no referendum since 1986 has been passed with a support level between 51 per cent and 59 per cent: we only do close calls or walks in the park. Will the upcoming referendum be an exception to this rule?

It is also important to keep in mind the late decline in support for marriage equality in the 2015 referendum – from 70 per cent support in the Irish Times/Ipsos MRBI pre-referendum poll to 62 per cent Yes on the day.

When it comes to polling predictions, we may be best leaving it to the wisdom of crowds. When asked to give their best guess, voters in today’s poll predicted the referendum will be carried – 56 per cent Yes and 44 per cent No.

1 All students will not return to school even if social distancing rules are relaxed – McHugh
2 Brazilian gang held in Offaly had sub-machine gun and student visas
3 Coronavirus: Further 9 deaths reported along with 46 new cases
4 Miriam Lord: Taoiseach is trapped in a Zoom session from hell
5 Emily Maitlis thanks BBC viewers for support after Cummings row
Real news has value SUBSCRIBE