Booklet warns unborn babies will have no rights, ‘and you will never have a say on this again’ 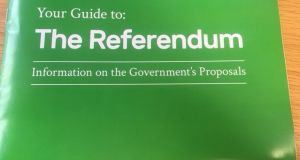 “We have laid out what we think is the most important part of the Government’s proposals,” says spokesman for the Save the Eighth group, John McGuirk

The Save the Eighth campaign has defended a booklet delivered to 200,000 households which has the appearance of an official Government publication.

The green booklet, entitled Your Guide to the Referendum – Information on the Government’s Proposals, looks like an official Government publication but instead contains arguments put forward by the No side, likely to be disputed by Yes campaigners.

The booklet warns that “unborn babies at all stages of pregnancy will have no constitutional rights, and you will never have a say on this again.”

The booklet also proposes an alternative “plan for life” which it says the Government will be “forced to consider” if the referendum is defeated. It includes several measures including “new financial support for mothers” and “free childcare from birth”.

It also includes statements from anti-abortion obstetricians disputing the suggestion that the Eighth Amendment has negatively impacted on the treatment of women in pregnancy.

According to small print on the penultimate page, the booklet is “published by, and sponsors include, Family and Life, Life Institute, www.save8.ie, www.protectthe8th.ie, Coalition Against Abortion on Demand.”

The spokesman for the Save the Eighth group John McGuirk said that 200,000 copies of the booklet had been distributed in areas where the group felt there is a large proportion of undecideds.

He said that research had shown that that there was still a high level of confusion about the nature of the Government’s proposals which would follow a repeal of the Eighth Amendment.

“We have laid out what we think is the most important part of the Government’s proposals,” he said.

Asked if the booklet was masquerading as an official Government publication, Mr McGuirk disputed this.

“I don’t think it does,” he said. “It states, this is what you’re being asked to vote on . . . We don’t think it’s dishonest or misleading.”

The authors, he said, had “tried to make it as impartial as possible”.