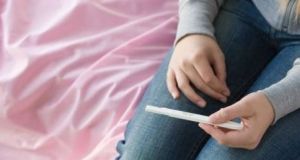 Sinead McCarthy told the Ray D’Arcy Show on RTÉ Radio One she was forced to choose between travelling to Liverpool for a “compassionate induction” or taking her pregnancy to full term in Ireland, despite the fact there was no chance her baby could survive outside the womb. File photograph: Getty Images

Sinead McCarthy was 20 weeks pregnant when she went in for a routine scan in her local hospital in Mullingar last December. She was happy and confident and looking forward to celebrating Christmas with her husband Pat and her two little girls, Holly and Ruby.

But when the scan, the third of her pregnancy, revealed that her baby had a condition that was incompatible with life outside the womb, her life was shattered.

In a pre-recorded interview, broadcast on the Ray D’Arcy Show on RTÉ Radio One on Wednesday, she described the ordeal she had to go through in the Irish health service, saying her baby’s “coffin is chosen instead of her cot” now.

She encouraged people to vote Yes in the referendum on repealing the Eighth Amendment so other women would not have to go through what she has been through in recent months.

In a highly emotional interview, she was critical of a system that had forced her to choose between travelling to Liverpool for a “compassionate induction” or taking her pregnancy to full term in Ireland, although there was no chance her baby could survive outside the womb.

She described how her world started to fall apart when she went for the routine scan on December 11th and heard the devastating news. She and her husband Pat travelled to the Rotunda Hospital in Dublin the following day where the diagnosis of a condition incompatible with life was confirmed.

Her details were then sent to the Liverpool Women’s Hospital and she was given the choice to carry the baby to full term or travel to the UK for a “compassionate induction”.

“It is not something you can decide on in five or 10 minutes, or even a couple of days,” she said.

The couple went home to think through their options.

She was subsequently contacted by the hospital in Liverpool and offered an appointment just days before Christmas. “We had a pantomime booked with the kids on that day and they knew about it and they had Christmas shows.”

She was also told that because she had had a previous C-section, she could be in hospital in the UK for a week.

But what troubled them most was what would happen to their baby after the procedure, and how they would get her home from the UK. “Basically you have to smuggle the baby onto the flight, or sail home with the baby in the boot of your car, or in many cases leave her. I couldn’t bear to do that.”

She pointed out that their baby had not been “diagnosed with a disability or anything she could live with; we knew for certain she has no chance of survival”.

The hospital in Liverpool said if she did not take the pre-Christmas appointment, she would be “put be down as a refusal and we don’t know when we can give you another appointment”.

They tried to keep things as normal as possible for the sake of their two children. “Christmas dinner was still cooked and Santy still came,” she said.

Ultimately they decided they could not travel to the UK. “We just didn’t want to do it, it was just extremely stressful and then you have the risk of somebody seeing you in the airport, and the stigma of it. It shouldn’t be that way because we didn’t do anything wrong,” she said.

‘Grace is her name’

“It is important to me that our baby – Grace is her name – that she will be buried with my father, and we didn’t want her ashes to be delivered by courier weeks later, it’s just terrible. We were told that this was just desperately bad luck and anybody has the chance of this happening to them, and you can’t describe the pain of it to anybody.”

Because they were going to have to take the pregnancy to full term, the couple felt they had no choice but to tell their children, aged five and seven.

She spoke of her sadness and her guilt at having to “put the kids through this; I feel awful guilty for taking a little bit of their childhood away”.

She told D’Arcy that some people had been suggesting that early induction “is this barbaric procedure, but it’s actually... the same as for the baby that’s full-term, a healthy baby, it’s just an earlier stage and it is compassionate not only to the mother, but to the baby”.

She said that if she had been offered the procedure in Ireland “then we would have already started on our journey to healing. We are never going to get over it obviously. Grace is our daughter and I love her.”

She said that Ireland had “finally realised the importance of good mental health [but] there are still people who want to force a mother to go on this journey. My heart goes out to the doctors in the hospitals because their hands are so tied. The Rotunda looked after us so well and the doctors and the nurses have been amazing and there was never any pressure to go to term or to go to Liverpool; it was completely left up to us.”

Baby Grace was born at 1.56am on Tuesday morning. Her funeral took place on Wednesday.

Also speaking on the programme was Liz McDermot who had previously told her story to the Oireachtas committee on the Eighth Amendment.

Ms McDermot, who is encouraging people to vote No based on her personal experience, described how she was told her baby’s limbs had not and would not develop when she was 24 weeks pregnant, in the autumn of 2002.

She said her doctor had told her the baby would only lie in bed for the rest of his life and said that as soon as she saw her baby John’s face in a scan she decided she would not terminate the pregnancy.

She gave birth in April 2003 after a normal delivery. She said John had reached all his developmental milestones and was now 15-years-old now and in second year in school.