DUP says it will not be ‘bullied’ into changing abortion stance 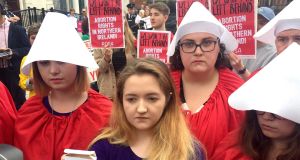 Eleanor Crossey Malone, from the socialist feminist group Rosa, after she took an abortion pill outside Belfast’s Crown and High Courts, where counter-demonstrations were held by both sides of the Northern Irish abortion argument. Photograph: David Young/ PA Wire

The DUP has said Northern Ireland will not be “bullied or bounced” into changing its abortion laws after feminist activists swallowed abortion pills outside Laganside courts in Belfast.

Anti-abortion South Down MLA Jim Wells was speaking on Thursday outside the North’s main court buildings after three pro-choice campaigners took abortion pills in front of the PSNI in defiance of the strict laws governing terminations.

On British and Irish citizens not having the same access to abortion services as those in Scotland, England, Wales, and soon the Republic of Ireland, Mr Wells said it was “entirely our right under the devolution settlement to make our own decisions on that”.

“The Assembly discussed this in detail on February 10th, 2016 and after a lengthy debate decided we did not need to change the laws in Northern Ireland and that is where we stand.

“And we are not going to be bullied or bounced into changing our laws because of what happened in the Irish Republic.”

Abortion law in Northern Ireland dates back to the Offences Against the Person Act 1861 and the Criminal Justice Act (NI) 1945, making abortion illegal in almost every circumstance and the law some of the most restrictive in the world.

Every day it is estimated that about three women from Northern Ireland travel to England to undergo legal abortion; with many others risking prosecution for self-administering abortifacients (abortion pills) at home; or they are compelled to carry pregnancies to full term.

British prime minister Theresa May has come under pressure to legislate for abortion in the absence of the Stormont Assembly which collapsed in January 2017.

Amid a major PSNI presence on Thursday three young women from the socialist feminist group Rosa (Reproductive rights, against oppression, sexism and austerity) swallowed abortion pills at the event which was also attended by Solidarity-People Before Profit TD Ruth Coppinger.

Rosa activists Eleanor Crossey Malone, Courtney Robinson and another woman who declined to give her name took the tablets in front of a police officer who was filming them. The women declined to reveal if they were pregnant.

Police seized two small robots along with a number of pills, which were surrendered voluntarily, during the demonstration.

Chief inspector Stephen McCauley said: “Officers recorded footage of the demonstration, the details of a number of participants and have spoken with one of the event organisers.

“We will be reviewing the footage to determine whether any offences have been committed, but as we are now investigating this matter, we will not be commenting further.”

Precious Life director Bernie Smyth was joined by a handful of anti-abortion protesters for a counter demonstration.