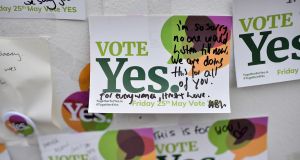 There was great delight from the Yes side as soon as their tallies began to indicate a local result in excess of 60 per cent. Photograph: Charles McQuillan/Getty Images)

Three in every five voters called for a Yes vote in Galway East as the constituency voted overwhelmingly in favour of repealing the Eight Amendment of the Constitution.

The count centre in Headford was the first to return its official results figures, with 26,525 of the 44,192 votes cast in favour of the amendment to the Constitution.

Returning officer, Derry Buckley, delivered the result to the sparse crowd in attendance, which by the time of the official announcement appeared to be entirely made up of Yes campaigners.

One of the highest Yes votes came from the town of Kinvara, which delivered 72.82 per cent Yes according to tallies, while Loughrea (66.42 per cent), Tuam (61.93 per cent) and Athenry (59.65 per cent) all returned comprehensive Yes votes. Only 11 of the 119 boxes tallied delivered a No vote.

All three of Galway East’s TDs, Ciarán Cannon (Fine Gael), Anne Rabbitte (Fianna Fáil) and Sean Canney (Independent) were advocates of the No campaign, and none of the three were present in Headford at the count centre by the time the result was announced.

There was great delight from the Yes side as soon as their tallies began to indicate a local result in excess of 60 per cent and according to Aoife Moore, spokesperson for Galway East Together for Yes, their hard work had paid off.

“Galway East is a very hard constituency with three TDs who are ‘No’. We didn’t get any guidance from them,” said Ms Moore.

“If you looked at the maths and took out the undecideds it predicted the result but we never ever took anything for granted. We knew we had a battle on our hands.”