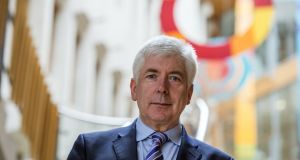 Alex White said: “Our relationship with the EU is the central political and economic question of our time.” Photograph: Brenda Fitzsimons

Former minister for communications Alex White is to seek the Labour Party’s nomination to run for the European Parliament.

In a letter to members Mr White said he was aiming to be a candidate in the Dublin constituency. and would, therefore, not be standing in any upcoming general election.

He informed party leader Brendan Howlin of his decision in October, and confirmed it to the party’s general secretary before Christmas.

Mr White, who is now a councillor, wrote: “Of course the decision is entirely a matter for the party membership. I hope to persuade the members that I would be a suitable candidate to win back this important seat in Dublin.

“Our relationship with the EU is the central political and economic question of our time. None of the enormous challenges facing us – the future of work and workers’ rights in the digital age; the need for investment in infrastructure; corporate taxation; and climate change to highlight just a few – can be addressed by any one country acting alone.

“At the same time there is a real crisis of legitimacy in the EU project and in its institutions, and a manifest need for radical change. I want to use my experience as a lawyer, politician and Minister to help address these issues, and most especially to reclaim Irish Labour’s voice at the heart of Europe. ”

Mr White was one of Labour’s highest profile political casualties in the 2016 general election. He previously served as a Senator and South Dublin county councillor.

He was co-opted to Dún Laoghaire-Rathdown County Council after the resignation of Cllr Carron McKinney in May.