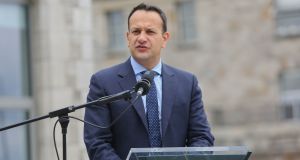 Taoiseach Leo Varadkar: the four Independent Ministers are expected to say to him that talk of an early election in Fine Gael is damaging the stability of the Government. Photograph: Gareth Chaney/Collins

Independent Alliance Ministers will urge Taoiseach Leo Varadkar to tone down talk of an early election in Fine Gael when they meet him to discuss the future of the Government on Tuesday.

The Ministers are scheduled to meet Mr Varadkar and Minister for Finance Paschal Donohoe for discussions on the forthcoming budget and the future of the Coalition in the autumn.

The Independents are expected to say to the Taoiseach that talk of an early election in Fine Gael is damaging the stability of the Government and to argue for a review of the confidence and supply agreement with Fianna Fáil after the budget is concluded in October.

A Government spokesman declined to comment on the meetings in advance.

The Independents will also make their pitches to Mr Donohoe for funding for their departments and preferred projects in the autumn budget and estimates process.

All will be involved in the estimates process which allocates funding for next year, and all will have requests for funding related to their department.

A fifth member, Sean Canney, quit the Alliance earlier this year after a row about the rotation of Mr Moran’s junior ministerial job, but continues to support the Government.

The Independent Alliance members have been alarmed by talk of an autumn election in Fine Gael and by the acceleration of election preparations in the main Government party.

Fine Gael and Independent Ministers clashed at the recent Cabinet meeting in Kerry over the prospect of an early election.

The row came after Mr McGrath had criticised Fine Gael Ministers for “swaggering around the place” – comments which attracted adverse reaction from some of his Cabinet colleagues.

Talk of an early general election has cooled in Fine Gael since the Dáil adjourned for the summer recess.

Strong opinion poll figures for Fine Gael accompanied weeks of speculation that Mr Varadkar would seek an autumn poll if Fianna Fáil declined to offer an extension of the confidence and supply agreement, under which the party supports the Government.

The agreement is due to expire at the end of this year.

In a series of interviews over the weekend, Fianna Fáil leader Micheál Martin was again critical of the Taoiseach’s approach to negotiations on the confidence and supply agreement and said the time to review the agreement is after it expires.

The Taoiseach has stressed the need for stability for the Government during the Brexit negotiations, which reach a crucial stage in the autumn.

Mr Martin and Mr Varadkar will meet again on the issue in September.

While both Fine Gael and Fianna Fáil have accelerated electoral preparations in recent weeks, high-ranking sources in both parties acknowledge that the prospect of a general election has receded.