Steven Agnew praised for his ‘dedication and skill’ by Eamon Ryan 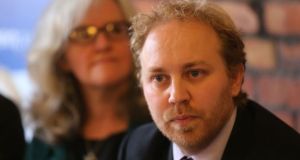 The leader of the Green Party in Northern Ireland is to quit, blaming in part the powersharing impasse at Stormont for sapping his drive for the job.

Steven Agnew said he was “frustrated, despondent and angry” that he had been unable to perform his role as a legislator for 18 months, accusing Sinn Féin and the Democratic Unionists of “betraying” the needs of local people.

Mr Agnew, who will remain as an Assembly member for North Down, said he had considered leaving politics completely but decided against it, believing he still has a lot to contribute.

The 38-year-old father-of-two said a desire to spend more time with his son, who is nine, and his daughter, six, was another major factor in his decision to stand down as leader.

He also suggested that after almost eight years in post, during which time he led the Green Party into eight elections, it was time for someone with “fresh energy and vision” to take the party into next year’s local council elections.

In an interview with the Press Association, where he acknowledged that his motivation for the role has dimmed since Stormont collapsed, Mr Agnew said he believed he was strongest when on the floor of the Assembly and, as he was no longer able to legislate in the chamber, it was right he handed the baton on.

“My skills and strengths are as a parliamentarian and obviously in the context of no sitting Assembly I feel I am now the wrong person in this role,” he said.

Asked whether frustration characterised his view of the Stormont deadlock, Mr Agnew aimed a scathing broadside at the DUP and Sinn Féin, claiming the parties were intent only on shoring up their own support base, rather than working together for the needs of the wider community.

Stormont powersharing crashed in January 2017 amid a bitter row between the DUP and Sinn Féin over a botched green energy scheme.

The impasse later widened to include more traditional issues of contention, such as the Irish language, LGBT rights and how to handle the legacy of the Troubles.

“Frustration is one word, despondency at times but I think really I am angry,” said Mr Agnew.

“I am angry that we have two parties that are putting their needs as parties ahead of the needs of the people of Northern Ireland. I don’t think anyone could say this period of suspension, or call it what you will, is good for Northern Ireland.

“The decisions that need to be made are stacking up and the impact particularly on the community and voluntary sector has been huge and services aren’t being delivered in the way they should — the challenges in terms of the health service and education are not being met.”

He added: “I tend to be moderate in how I present these things, but I am angry - I do think it’s a betrayal of the people of Northern Ireland.

“And regardless of how it impacts on me or my party, we are here to provide good governance, that’s what we get elected for.

“Ultimately you get elected to be in power, to make decisions, to make change and they have stepped back from that, they have relinquished power and, in the meantime, they have left Northern Ireland in a state of limbo and with each passing day more and more problems arrive that are not being solved.”

Mr Agnew will remain as leader until his successor is selected in the autumn. He said he found the demands of the role increasingly incompatible with being the father of two young children.

Mr Agnew said he used to be “obsessed” about his leadership role.

“I have to be honest with myself and my party — that same energy, that same obsession isn’t there,” he added.

“So I hope the new leader will be as obsessive as I was and give that drive going into the council elections because if they do the party is in the right space to make another breakthrough in May 2019.”

He said he had “no regrets” about his time at the helm of the party, listing his lobbying and legislative initiatives on children’s issues, fracking and same-sex marriage among his proudest moments in the role.

Mr Agnew said he understood the public anger that he and colleagues were still getting paid their full salaries, despite an announcement from Secretary of State Karen Bradley in March that she was “minded” to cut their pay.

“I do resent the position I find myself in now, and the country finds itself in now, in that we don’t have a functioning Assembly and the role of MLA has been devalued,” he said.

“Fealty’s in Bangor would be my local pub where I would most often go if I’m having a drink. It used to be you would walk in and somebody you may or may not know offering to buy you a pint and now the first thing you’ll get asked is not ‘What are you having Steven?’ but ‘Are you still getting paid?’

“It’s usually said in good humour but underneath is a genuine frustration at the situation.

“Whilst I don’t take it personally and often people will say ‘Look, we know it’s not your fault’ and that’s nice, I feel like they do — I want to be in the Assembly, I want to be delivering on what I worked really hard to achieve in getting elected. It’s not easy being Green, it’s certainly not easy getting elected as a Green.

“I didn’t do it for this, I didn’t do it to collect a pay cheque without feeling that I’ve done everything I can and should be doing.

“I want the Assembly back up and running. I want decisions being made.”

Mr Ryan said he was glad Mr Agnew had decided to stay on as an MLA, and hoped that the anger and frustration he expressed about “the ongoing sabotage of the elected Assembly” would shame others into taking steps towards its restoration.

“We have been privileged to work with Steven over the last eight years. The dedication and skill he brought to his role as leader of the Green Party in Northern Ireland were a source of inspiration to us all. We wish him all the very best as he steps down as Leader, and look forward to working closely with his successor,” Mr Ryan said.

“The energy, commitment and calm Steven showed through all the elections of recent years were a testament to his character and leadership.

“Personally, I am most grateful for the friendship and support Steven showed me as we continued to operate our all-island party in our own unique and collaborative way.”

Mr Ryan said he was glad Mr Agnew would be able to spend more time with his children. - PA

Seven-and-a-half years jail for man found with €1.1m worth of drugs in ‘socks’ box 15:32
Teenage boys and organised crime gangs: A complicated dynamic 15:26
Woman did not die at any of nine locations where body parts were found – court 15:15
Dublin Fire Brigade deals with blaze in Swords commercial unit 15:06
‘Extensive investigation’ taking place into Lunney attack – State solicitor 15:02
SUBSCRIBER ONLY