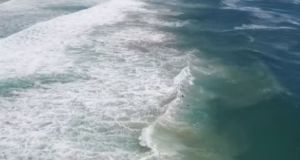 A bottle thrown into the Indian Ocean in 1886 has turned up in Western Australia, with the message inside intact. Photograph: AFP/Screengrab

The world’s oldest message in a bottle has been found on a beach in Western Australia by a couple who thought it might “look good on a bookshelf”.

Tonya Illman found the 132-year-old gin bottle in the dunes near Wedge Island in January. Her husband, Kym Illman, told Guardian Australia she initially thought it was rubbish but picked it up because it had distinct, raised lettering and would be at home on their bookshelf.

Inside, she found a roll of paper printed in German and dated to June 12th 1886, which was authenticated by the Western Australian Museum.

“It was an absolute fluke. It won’t get better than than this,” said husband Kym Illman.

The bottle had been thrown overboard from the German sailing ship Paula in 1886 as it crossed the Indian Ocean, 950km from the Australian coast, according to Ross Anderson, the museum’s assistant curator of maritime archaeology.

At the time, German ships were conducting a 69-year experiment that involved throwing thousands of bottles into the sea to track ocean currents.

Each message was marked with the ship’s coordinates, the date, and the name of the ship, which Anderson used to verify the message.

Details from the Illmans’ message matched Paula’s maritime records, and Anderson also compared handwriting samples with captain’s entries in Paula’s meteorological journal. “Incredibly, there was an entry for June 12th, 1886, made by the captain, recording a drift bottle having been thrown overboard,” Anderson said.

His finding was confirmed by experts at the German Naval Observatory. The previous record for oldest message in a bottle was 108 years.

Kym Illman said that after bringing it home the damp and ancient paper was put in the oven for five minutes to dry it out.

Of the thousands jettisoned, 662 other messages from the same German experiment have been found and returned before the latest discovery. The most recent was found in 1934. (Guardian)