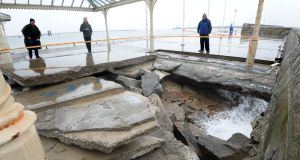 The scene on the East Pier Dun Laoghaire as the storm passes leaving its toll. Photograph: Cyril Byrne / THE IRISH TIMES

On the eve of a major debate on the future control and ownership of Dun Laoghaire Harbour, the Harbour’s east and west piers have been badly damaged by Storm Emma.

Photographs released by the Dun Laoghaire Harbour Company show parts of the surface of the East Pier ripped up by the storm with further damage to the bandstand- also known as the sun shelter.

The harbour company said it was closing parts of the piers “due to extensive damage to the surface of the upper East Pier and sun shelter and to ensure the safety of our visiting public”. Barriers and signage were being erected on Monday morning.

The upper level on the East Pier has been closed until further notice while emergency repairs are taking place on the lower level. A section of the West Pier will also be closed.

On Tuesday, management of Dun Laoghaire Rathdown County Council is set to recommend the dissolution of the Harbour Company on Tuesday night, along with the transfer of assets to local authority control.

The storm damage is likely to make councillors more nervous about taking on responsibility for the harbour. Chief executive Philomena Poole has already said the local authority is not in a position to pay for €33.1 million in repairs needed to bring the harbour up to normal “taking in charge” standard.

Ms Poole is understood to be preparing to tell councillors that the best option for the future of the harbour and the local authority is for Dun Laoghaire Harbour Company to be dissolved, and its assets transferred to the local authority.

But even at that Ms Poole has already said the cost of ongoing maintenance at the harbour is likely to cost the local authority €800,000 a year, which will have to be provided for in the council’s budget.

Dun Laoghaire Harbour is currently operated by the Harbour Company which is responsible to the Department to Transport. Under the Harbours Act adopted in 2015 responsibility for numerous small harbours across the State has been transferred to local authorities on the basis that it is more appropriate that such harbours be controlled locally.

But in the case of Dun Laoghaire progress has been slow and a due diligence report was followed by a risk assessment which found the cost of works required to bring the harbour up to “taking-in-charge” standard is €33.1million.

On Tuesday, Ms Poole will tell councillors the council has has no means of funding the €33.1 million and has conveyed this to Minister for Transport Shane Ross.

Ms Poole will outline two options for the councillors from which they may choose a recommendation to Mr Ross. The first of these, is the dissolution without winding up of the harbour company. The second option is the transfer of the harbour asset to the local authority and the dissolution of the Harbour Company.

A spokeswoman for Minister for Transport Shane Ross said he is out of the country at the moment.

The campaign group Save Our Seafront welcomed the chief executive’s strategy. Chairman of the campaign Richard Boyd Barrett TD called on Mr Ross to approve the recommendation and “act swiftly to bring the harbour under democratic control”.

Councillor Melissa Halpin a long time critic of the harbour company also welcomed moves by the local authority to take control of the harbour.