What could Ireland buy with the €13bn Apple tax?

We could give the Government an open tab in the Dáil bar for 10,833 years 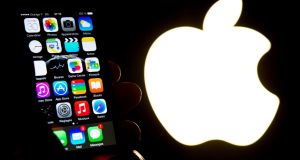 The European Commission has found that Apple owes the Irish State € 13 billion in back taxes after ruling that the technology giant’s tax arrangements in Ireland constituted a form of illegal state aid. Photograph: AFP/Getty Images

The European Commission has found that Apple owes the Irish State € 13 billion in back taxes after ruling that the technology giant’s tax arrangements in Ireland constituted a form of illegal state aid.

That works out as approximately €2,732 for every single person in the Republic of Ireland.

So, what could the Irish State buy with that €13 billion? Here are a few ideas:

1. MacBooks for everyone in the audience

If Apple settles its debt by doling out merchandise, each person in Ireland would get approximately one 15 inch Mac Book Pro, valued at about €2,800.

If the Government chose to spend the entire sum on free pints and food in the Dail, they could have an open tab for 10,833 years, meaning they wouldn’t pay for a cheap Guinness until the year 12849.

3. A Spire in every school

We could build roughly 3,250 replicas of the Spire on O’Connell Street in Dublin. Enough for each of Ireland’s 3,200 primary schools, with a few left over. OR, we could stack them end-on-end on O’Connell Street, tip the whole lot over in a south-easterly direction, and it would reach Oxford.

The Government could pick up everyone’s motor tax bill until about the year 2028.

The State could buy one copy of The Irish Times for every single person in the Republic of Ireland every single day of the week (except Sundays, of course) for the next four years. Sure what more would you want?

It costs an average of € 8 million to build one kilometre of motorway in Ireland, meaning you could build1625km of motorway. That would get you from Dublin to Lisbon.

In memory of the co-founder of Apple, Steve Jobs, you could buy 97 million replica black turtlenecks, his favourite item of clothing.

The fiscal space – allowing tax cuts and increased spending - is expected to be about € 1 billion in October’s budget and about €11 billion between now and in budgets up to 2021. So the Apple tax windfall could deliver tax cuts and spending increases until then (with € 2 billion left over). All assuming Fianna Fáil supports them of course.