Jaywalker fined for ‘sexism in a public space’ 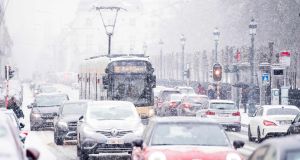 A 23-year-old jaywalker’s sexist diatribe against a Belgian policewoman who challenged him has been fined €3,000 for “sexism in a public space”.

He is the first to have been convicted under a 2014 law introduced following a TV documentary, “Femme de la rue”, showing almost routine sexual harassment of women here in the street.

The conviction in November 2017 for a 2016 offence has just been publicised by Le Soir and is causing much public debate in Belgium.

“Shut your mouth, I don’t talk to women, being a police officer is not a job for women,” the man allegedly told the female officer following a chase by officers who had seen him crossing a road on a red light in the Flemish Brussels suburb of Zaventem.

The officer arrested him and filed charges.

Sexism, according to the law, is defined as “every gesture or deed” that is “clearly meant to express contempt of a person based on sex,” or considers a person inferior based on sex, or reduces a person solely to a sexual dimension, and which “gravely affects the dignity of that person as a result.”

Conviction can lead to a prison sentence of up to one year and a fine of up to €10,000. If he fails to pay his fine the young man faces a month in jail. Over 30 per cent of the 40,000 Belgian police are women.

“It happens frequently that people arrested by the police insult or threaten them. But to personally blame a policewoman because of her sex is something particular,” said Gilles Blondeau, a spokesman for the local public prosecutor’s office.

According to a survey last month by the University of Ghent, nearly nine out of 10 women in Brussels have experienced some form of sexual harassment.

Eighty eight per cent of those surveyed reported experiencing sexual harassment in the streets of the Belgian capital.

“There is too little respect for women,” Brussels State Secretary for Equal Opportunities Bianca Debaets, who had commissioned the survey. “If women on the streets are being shouted at using sexual insults, that is no small crime,” she added.

Ms Debaets, who also spearheaded a campaign to encourage women to file reports with the police, is planning shortly to introduce an app called “HandsAway Brussels” like one already available in France. It will allow victims and witnesses to report harassment or assault and provide information about where and when they took place.

0:00 Pubs to stay closed and restrictions to remain on all gatherings, Cabinet decides