Has the US army just posted the weirdest St Patrick’s Day tweet?

The US Army posted a St Patrick's Day video on its social media channels today, along with the captions "We appreciate how everyone wears a little green like us today" and "We wear green everyday in the US Army". 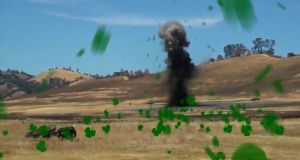 Screengrab from video released by US army. Image: US army/Twitter

The US army raised eyebrows on Twitter on Saturday when it released a bizarre video celebrating St Patrick’s Day.

The video, which appears to be mostly taken from training footage, begins with a helicopter firing shamrock missiles and things only get weirder from there.

A soldier dancing in front of a Tricolour filter with the backing of an off-kilter attempt at an Irish soundtrack forms the basis of the 55-second video interspersed with shots of shamrocks superimposed on various ballistics.

Happy #StPatricksDay from the #USArmy.

We appreciate how everyone wears a little green like us today. pic.twitter.com/NQc2xJLkkD

The tweet posted on the official US army page at 1pm Irish time attracted lots of criticism with some calling it “revolting” and propaganda and demanding it be deleted.

The video is accompanied by the message “Happy #StPatricksDay from the #USArmy. We appreciate how everyone wears a little green like us today.”

It has been retweeted more than 1,600 times.

The Irish Defence Forces’s only tweet on St Patrick’s Day was in praise of the 588 members serving abroad.