St Patrick’s Day: ‘We heard you guys have a pretty good party over here’

An estimated 450,000 people were in Dublin city centre today for the annual St Patrick’s Day parade. 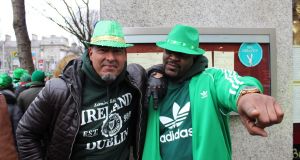 Eniade Familoni and Eduardo Hernado (right) from the US. ‘I have no idea what to expect, but a good time.’ Photograph: Jack Power

Eniade Familoni and Eduardo Hernado were sitting in a bar in Lisbon, Portugal, two weeks ago when they realised St Patrick’s Day was due to fall on a Saturday.

Familoni, from Texas, said the pair decided as they were already close, they would travel to Dublin for the weekend.

“I have no idea what to expect, but a good time,” he said, dressed in an all green tracksuit on Westmoreland Street.

“So far Ireland has definitely lived up to it. Everybody is nice, everybody is cool, everybody just wants to have a good time. This is the kind of thing that vacations and celebrations are made of,” he said.

Hernado, from Miami, Florida, said it was a “once in a lifetime” opportunity to spend St Patrick’s Day in Dublin. “We heard you guys have a pretty good party over here so we thought we’d join in,” he said.

“When you’re from the US it’s not often you can be over here for this great moment, so I couldn’t pass it up,” Hernado said.

Redmond McFadden (81) and his wife Doris had travelled down from Co Derry to see the parade.

“This is my first time ever to see it,” Redmond explained. “It’s absolutely brilliant, to see all the different nationalities here, it is wonderful,” he said.

Redmond said it was a “lifetime ambition” to see the St Patrick’s Day parade in Dublin, but he had never found the time to travel down. He had worked as a teacher in a technical college, and as a referee in Irish domestic football.

Camilla Ponzona and Jessica Tassan were another pair watching the parade, who recently moved to Dublin from Milan, Italy.

“We arrived two months ago, we work here, I think maybe one, two years we would like to stay,” Camilla said.

“This is the first time to see this parade, I think it’s very beautiful,” she said, despite the cold weather. The party atmosphere on the streets of the city centre was a “symbol” of the Irish, she said.

Clare Ryan and her young daughter Charlotte were waiting for the parade to pass by at College Green. “We just moved up to Dublin from Kildare, its Charlotte’s first time at the parade,” Clare said.

Charlotte said she was looking forward to seeing the floats, and had never been anywhere as busy before. “It’s much busier than down in Kildare anyway,” her mother Clare said.

As the crowds lined the parade route on Westmoreland Street it started to lightly snow, but the threat of rain held off as the parade began. Off the route, groups of tourists started to build up outside most of the pubs in Temple Bar.

Hubert Zimmer, who had travelled from Rosenheim, Germany, was part of one such group. They had come to Dublin on St Patrick’s Day for a bachelor party.

Zimmer, dressed in a leprechaun custom, with his beard dyed green, said it was their first time in Ireland. “Ireland is cool, its green, we like green,” he said.

The group said they would leave the pub to see the parade, then continue the party across Temple Bar afterwards.

The groom, Sebastian Hausimger, was dressed in a white suit, and said the date of his wedding was in May, “but I don’t know the year,” he joked.

Sandro Janki was part of another group of four from Switzerland. The group, all dressed in green suits, had also come to Dublin for the weekend.

The atmosphere in Temple Bar was “a little crazy” he said, but the group were looking forward to the day.

The first eight days: How the coronavirus pandemic struck Ireland 14:00
Covid-19 Vaccine Tracker: What's available in the Republic of Ireland and what else is coming? 13:56
Covid-19: HSE aims to vaccinate 10,000 people with chronic conditions next week 14:34
Teenager injured after goalpost fell on her secures €52,000 settlement 11:48
Covid-19: Galway city records highest incidence rate for third week in a row 11:15