A Dáil debate on the report of the Joint Committee on the Eighth Amendment of the Constitution ran for two days and contributions were both emotional and surprising. Video: Oireachtas 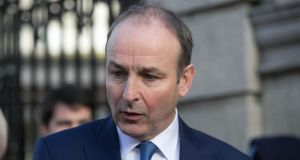 Fianna Fáil TDs who are against changing Ireland’s abortion laws are demanding that their voices be heard in the referendum campaign as divisions opened up on the issue in the party.

Some who are opposed to party leader Micheál Martin’s surprise call for abortion to be allowed up to 12 weeks into a pregnancy without restrictions say their attitudes are more in line with the Fianna Fáil membership.

A group of such TDs and Senators are expected to meet next week and Mr Martin will be pressed on the issue at the weekly parliamentary party meeting.

Mary Butler, a Waterford TD who is against repealing the Eighth Amendment, said TDs and Senators who have a different view to Mr Martin must “absolutely” be given equal prominence during the referendum campaign.

“I have spoken to quite a lot of TDs who are of the same mindset as me,” she said, adding that Mr Martin and Billy Kelleher, Fianna Fáil’s health spokesman who shares Mr Martin’s view, will get “a lot more traction”.

Cork South West’s Margaret Murphy O’Mahony downplayed suggestions of rival groupings emerging but said the “mixed views” had to be heard and that Mr Martin, as leader, “has more credence than members of the parliamentary party”.

Fianna Fáil members acknowledged there was a free vote on the issue of abortion and that Mr Martin was as entitled as anyone else to express his opinion.

Meanwhile, discussions are continuing in Government about the wording of what will be put to voters in the referendum and the heads of a Bill outlining what legislation would be introduced if article 40.3.3 of the Constitution is removed. Minister for Health Simon Harris and Attorney General Séamus Woulfe held a meeting on the issue yesterday.

Sources told The Irish Times that the Bill setting out what would replace the Eighth Amendment in the event of the referendum being carried will be published in March. It will offer a detailed outline of what legislation would be put in place in the event of the amendment being repealed.

It is unlikely to provide gestational limits for abortions in the cases of fatal foetal abnormalities or when a mother’s life or health is at risk.

Similar to the Protection of Life During Pregnancy Act, two medical practitioners will have to examine the woman and jointly certify that the risk to her life or her health can only be averted by carrying out the procedure.

Taoiseach Leo Varadkar – who is widely believed to support abortion without restrictions up to 12 weeks – is expected to make his views known by the end of the month. Tánaiste Simon Coveney has also yet to express his position.

A meeting of Fianna Fáil executive on Thursday heard some objections to Mr Martin’s views. James Doyle, the leader of the party’s youth wing, is understood to have said he was disappointed but respected Mr Martin’s position. Another member who objected to Mr Martin’s approach left the meeting early.

Sources present, however, said there was an almost equal split between those who praised the leader and those who were opposed to his position.