‘Love Locks’ to be removed from Ha’penny Bridge

Padlocks are likely to damage the structure, council says 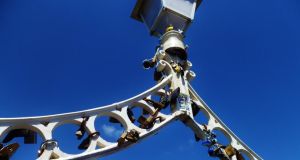 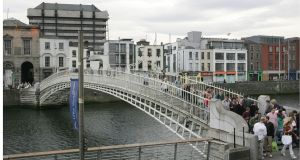 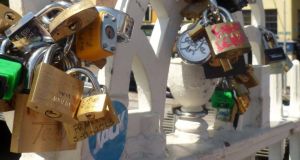 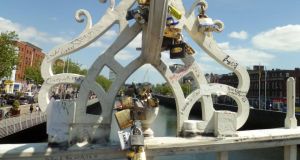 Clumps of “love locks” attached to Dublin’s Ha’penny Bridge are to be removed with warnings that their continual appearance is likely to damage the iconic structure.

It comes after a blog that appeared on Reddit.com today sparked an exchange on the subject and offers by members of the public to pick the locks and remove them.

Darragh Doyle, community manager of the website worldirish.com, said that although supposed to be romantic, in reality the phenomenon is ruining the bridge’s appearance.

The idea behind love locks is that the names of couples are either written on or engraved into a padlock which is then attached to a structure and the key thrown away.

Since 2011 padlocks have been appearing on the Ha’penny Bridge and while Dublin City Council has continued to remove them, the popularity of the idea has meant they simply keep appearing.

Council officials have warned that removing them from the steel railings with cutters poses a potential risk of damage.

An online debate on the subject led to an offer by a group of lock-pickers who offered to remove them for the council.

While the offer will not be taken up, a spokeswoman said they would continue to clear the railings and overhanging steel beams.

“Dublin City Council has removed locks on a number of occasions and we intend to continuously remove locks as they reoccur,” she said.

“They can cause minor damage to paintwork which can be repaired. It is not possible at this stage to suggest a method of preventing further locks being placed on bridges. We will continue to monitor the situation and remove .”

The love locks have also appeared on other bridges in the city.

Mr Doyle told the Irish Times that while he initially liked the idea he had changed his mind.

“I saw these about two years ago on the bridge and I thought it was kind of cute. They were actually engraved and I would have sent out photos on Twitter,” he said.

“But I have been across the bridge more and more recently and it really detracts from the bridge. There are just so many of them now.” He puts the number at approximately 150.

He said that people have now begun to write love messages on the bridge itself, rather than on the attached locks.

“They are using the bridge as a canvas and it’s supposed to be a tourist attraction.”