Television judge doesn’t mind comparisons between her and Thatcher

Judge Judy speaks to the media before being awarded vice-presidency of UCD's Law Society. Video report by Jason Kennedy. 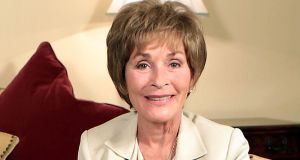 American television personality Judge Judith 'Judy' Sheindlin said it's not a bad thing that she is compared to Margaret Thatcher.

The start of TV Show Judge Judy made the comment before being awarded vice-presidency of the UCD Law Society this evening.

“I think that she was a dynamic personality. I know she had people who were detractors, but I think that she broke that ceiling and said to women you can be anything that you set your mind to,” she said.

Ms Sheindlin added that she is happy to be back in Ireland and delighted to be awarded by the society.

“It's great to be back for a return visit to Ireland. My husband and I vacationed here several years ago and were so impressed with the people, the rich history, the terrific pubs and amazing sites. This time we plan to see more of the beautiful countryside and magnificent coastline,” she said.

“Being in such distinguished company is a thrill and extremely meaningful. I have been extremely fortunate to have had two careers--one in the family court and the other in the television court-- that I have loved. It's especially gratifying to be recognized by UCD for my work in the family court where I hope that I made a difference in the system and people's lives.”