‘It is humanity in all its beauty, hairy arse and warts’ 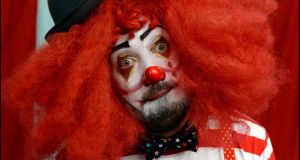 “Eventually my clown make-up is in place . . . After this a big frizzy wig and bowler hat are pinned to my head and I am given flat-footed clown shoes, checked trousers, a stripy shirt, braces and a dickey bow. I’ve worn worse clothes.” Photographer: Brenda Fitzsimons 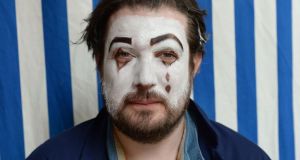 “Greasepaint is still the make-up choice of clowns due to how resistant it is to buckets of water and sweat.” Photograph: Brenda Fitzsimons 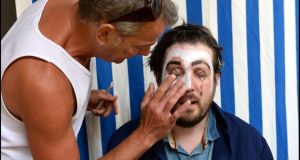 Make-up artist Val Sherlock in the process of creating a clown face for Patrick Freyne in the Ark in Temple Bar. Photograph: Brenda Fitzsimons

I’ve had a makeover. The Ark children’s cultural centre in Dublin’s Temple Bar has launched Roll Up! Roll Up!, an interactive exhibition that allows children to learn the history and the skills of the circus from a troupe of trained actors. So they offered to turn me into a clown.

My transformation is executed by make-up artist Val Sherlock and watched by Raymond Keane, artistic director of Barabbas theatre company and a winningly enthusiastic theatre clown. The physical transformation is only part of the process, says Keane. I must also embrace my “inner clown”.

“That clown is you,” says Keane of my inner clown. “If people don’t like the clown, they don’t like you.” Traditionally, once someone discovered their clown they registered the likeness with Clowns International in London, the world’s oldest clown society.

“This was done by painting an egg and sending it to them,” he says. “They say that when you died, they smashed your egg,” although Keane is sceptical about this himself. “If that’s true then why do they still have them?” (The next day the Ark send me a painted egg featuring my own clown image).

School punishment
Keane recalls when he first became aware of his own inner clown. “As a form of punishment my fifth-class teacher would cover my nose with red biro and send me home like that . . . You wouldn’t question that as a kid, you’d just do it. I do remember being mortified by it, this brand, but after a while I think I took a kind of a pride in it.”

Every culture has clowns, says Keane. He has thought long and hard about clowning and what it means. He talks eagerly about mummers and Wren Boys, 16th-century Italian commedia dell’arte figures, vaudeville acts, early silent movie stars, “the two boys in Waiting For Godot” and Native American rituals.

“For me the clown is about joy, truth, love, gullibility, vulnerability, stupidity, failure, divine failure and how we surmount failure,” he explains, waving his arms around like, well, a clown.

“No matter what happens, the clown goes on. It reflects everything that we are, from beauty to the grotesque underbelly . . . It is humanity in all its beauty, hairy arse and warts. It’s the human condition.”

Rule-breaker
This is why, he says, people are often frightened by clowns. “The clown is the only member of the circus who’s allowed to break the ring. He’s right there with you, right in the moment. The clown is anarchic. By nature the clown breaks rules.”

Val Sherlock believes face painting began with Greek theatre. “Those amphitheatres were so big, everything the character did needed to be exaggerated. The happy character had to be smiling. The victim had to look sad.”

By now Sherlock has etched clownish features on my face and is covering it with white greasepaint – still the makeup of choice for clowns due to its resistance to buckets of water and sweat. Sherlock has helped to create many clowns and pantomime dames and is always struck by the extent to which donning “the mask” liberates people. They say and do things they’d never do ordinarily, “because it’s not [them] who’s doing it. It’s the clown.”

World’s smallest mask
Eventually my make-up is in place and Sherlock presents me with a box of noses to choose from. The red nose “is often called the smallest mask in the world”.

Next, a big, frizzy wig and bowler hat are pinned to my head and I’m given flat-footed clown shoes, checked trousers, a stripy shirt, braces and a dickey bow. I’ve worn worse.

Then Kim McCafferty, a performer with Roll Up! Roll Up!, patiently teaches me to juggle. I fail to do so – and not in an entertainingly clownish fashion. “Don’t say sorry!” she says, as I apologetically deflect balls and trip over my flipper feet. Keane watches with the air of a clown connoisseur.

“Jesus, Val really got you,” he says, shaking his head in admiration.

“That’s the most terrifying thing anyone’s ever said to me,” I say.

Roll Up! Roll Up! begins at The Ark in Dublin on July 4th and runs until August 31st. Advance booking is advised.
www.ark.ie