Over 150 men from locality perished in the Great War, local historians discover 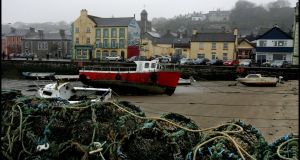 The seafront in Youghal. The town’s war dead have been commemorated. Photogrph: David Sleator

About 200 men from the greater Youghal area who died in the first World War and the second World War have been honoured and remembered with the unveiling of panels bearing their names in one of the oldest churches in the country.

Church of Ireland Bishop of Cork, Cloyne and Ross, Dr Paul Colton blessed the eight wooden panels bearing the men’s names as they were unveiled at St Mary’s Collegiate Church in Youghal at a special ecumenical memorial service on Sunday.

Local rector, Rev Andrew Orr said it was important to remember those of all faiths who had died in the conflicts from the greater Youghal area and about 400 people, including many descendants of the deceased, attended the ceremony in the 13th century church.

“We were very pleased with the ceremony where six of the descendants of those who died read the full 200 or so names – I think people in Youghal and the surrounding areas are very pleased that there is now a permanent memorial to those who died and a lot of people commented on how well it looks.”

St Mary’s Collegiate Church is a listed building and the commemoration committee worked closely with local conservation consultant, David Kelly on the wooden panels made by local craftsman, Willie Keniry to ensure that they fitted in with the historic surrounds.

The ceremony which saw the laying of wreaths at the altar follows seven years of research by Youghal local historians Norman McDonald and Billy Healy whose interest in how the first World War impacted on Youghal was triggered by the discovery of a grave at nearby Templemichael cemetery.

“Billy found the grave of this man, Private Oliver Havens when he was out walking one day at Templemichael and that piqued our interest and we began researching the subject and then we found another five wartime graves in North Abbey Cemetery in Youghal, “ said Mr McDonald.

“We focused on the Youghal postal district from Ballycotton to Clashmore in West Waterford and we found that some 900 men from the area fought in World War I and that some 154 of them died in the conflict, many in the Royal Navy, given Youghal’s seafaring tradition,” he added.

Mr McDonald explained that the discovery of a ledger - about to be thrown in a skip during the renovation of a building in Youghal - yielded the names of around 200 members of the Royal Navy Reserve in the Youghal area and some of those were among those who later became casualties.