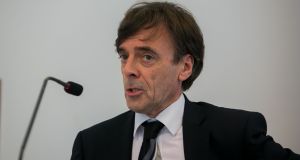 Prof Denis Cusack of the Medical Bureau for Road Safety: “Nothing can help to remove alcohol from your body, only time”. Photograph: Gareth Chaney Collins

“Morning after” drivers who may still be intoxicated even after sleep will be a key focus of the Christmas anti-drink driving campaign, Assistant Commissioner David Sheahan of An Garda Síochána said on Thursday.

Some 11 per cent of fatal collisions in which a driver had consumed alcohol took place between 7am and 11am, according to Garda and Road Safety Authority figures for this year which were released on Thursday.

Garda figures show that 6 per cent of all driving under the influence (DUI) arrests so far this year have taken place between 7am and 11am, mostly on Sundays or Mondays.

Prof Denis Cusack, director of the Medical Bureau of Road Safety, said “nothing can help to remove alcohol from your body, only time”.

It was “extremely difficult” to calculate how many drinks a person could have before being over the limit, he said. He warned that one pint of beer or glass of wine could put someone over the limit.

“If you’ve been out drinking until two or three in the morning, there’s a big risk, particularly if you’re a learner driver or a novice driver where the limit is 20 [20mg of alcohol per 100ml of blood], not only of being caught but also of being in an accident and causing injury or killing somebody,” Prof Cusack said.

“How much you drink, how quickly you drink it, whether you mix beer and spirits, whether you’ve had a meal, your weight, your obesity, fat cells, also whether you’ve taken food with it, and, indeed, how used you are to taking alcohol, all of these go together.

“We get rid of approximately half a pint or a glass of wine every hour. So if you take two pints it’s going to take four hours to get rid of that from your system,” he said.

“The advice really is, the bottom line is, don’t drink and drive,” Prof Cusack said.

More than 1,000 people are expected to be arrested for driving under the influence over the next six weeks, Mr Sheahan said.

He said 150 new gardaí had been assigned to regional roads policing units in 2018 and 85 more would be deployed to the Dublin metropolitan region to operate mandatory intoxicant checks over the holiday period.

A further 117 gardaí will be assigned to the urban centres of Cork, Galway, Limerick, Waterford and Drogheda. In addition the force had secured 20 new, high-visibility vehicles which would be used in mandatory intoxicant checks.

Gardaí will target roads around rural towns and villages, as well as having early evening, night and “morning after” check points and would even be operational on Christmas Day. He said last Christmas Day the force had made nine arrests for drink driving.

Mr Sheahan said since last April the numbers of arrests for drink driving had risen alarmingly. While they had been falling from about 610 in January to 560 in March, they had risen steadily since April . In the year-to-date, 6,890 drivers were arrested for driving under the influence. These included 6,480 alcohol detections and just over 400 drug detections.

He said the rise was partly attributable to adverse weather conditions keeping people off the roads in March, to the very warm summer which encouraged people to be out, as well as greater Garda enforcement and more vehicles on the road because of the economic upturn.

Some 970 arrests were made for intoxicated driving during the last Christmas and New Year campaign and the figure is expected to increase this year.

Mr Sheahan said his message for those who wished “to gamble with their own lives and the lives of others” this Christmas was that “you will be caught” and “you will be walking for a considerable period of time”.

Minister for Transport Shane Ross said he expected to get some criticism, as he had last year, for the Christmas campaign.However, he said “all we are about is saving lives”.

Ten new advisers to junior ministers to be appointed despite previous Government decision 13:03
Deported man says he has lived in airport for months 12:47
Judge orders release of woman who poses ‘imminent’ risk to mother 12:19
Flu vaccine delay should be resolved by end of October - IMO 12:18
Covid-19: Restaurant industry left ‘in a vacuum of the unknown’- RAI 12:06