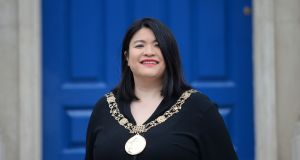 Gardaí have arrested and fined a woman after Dublin Lord Mayor Hazel Chu was harassed and racially abused outside her home on Thursday.

About 30 far-right demonstrators gathered outside the Mansion House on Dawson Street to protest against Ms Chu, who was born in Ireland to Chinese parents.

She was challenged for wearing a facemask in line with Covid-19 guidelines before one protester told her “when you turn into a shapeshifting dragon we will catch it on camera”.

Gardaí have confirmed one of the demonstrators was arrested and later fined €100 for breaching Covid-19 travel restrictions.

Ms Chu, who is also chairperson of the Green Party, has been the target of intense online and offline abuse since her election as a Dublin City councillor in 2019.

This has increased significantly in recent weeks after Ms Chu voiced sympathy for the family of George Nkencho, the black man who was shot by gardaí in December after attacking a shop worker and threatening officers with a knife.

It is understood members of the far-right organised on online message boards to hijack a small annual republican demonstration which had been planned for Thursday.

Ms Chu told RTÉ Radio One she was notified a group of far-right protesters were coming to the Mansion House at 11am.

One person put out their hand out and Ms Chu responded she could not shake it because of Covid-19.

“And then the other people with her started talking about how the mask I was wearing was to protect just me and not them and that people were suffering wearing masks,” she said.

“And as I was approaching the step one of them shouted ‘when you turn into a shapeshifting dragon we will catch it on camera’.”

More protesters then arrived, some of whom Ms Chu recognised as having abused her “on multiple occasions”.

The Lord Mayor said her daughter Alex was in creche at the time but that she sometimes worries for her safety when they go out. Alex has also been racially abused on the street, Ms Chu said, including by someone who called her a “mongrel”.

Ms Chu said she has also received post telling her Alex should be “deported back to China and be aborted there”.

Ms Chu said she has no issue with protests. “But you have to have a reason. It can’t just be because you don’t like the look of me. Because I can’t change that.”

Referring to the attack on the Capitol Building in Washington DC on January 6th, she said there is a need to combat these issues before they reach “boiling point” where “something happens and they say, ‘why didn’t we do something about it?’.”

“These things don’t die down, they build up,” the Lord Mayor added.