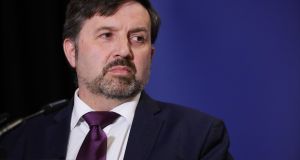 The latest figures from the Northern Ireland Statistics and Research Agency (Nisra) show that there were 156 Covid-19 related deaths in the week up to last Friday, January 15th, the highest weekly number since the pandemic began.

Nisra published its latest statistics on Friday, on a day when the North’s First Minister Arlene Foster said more British military support would be available to assist in the attempts to curb the spread of coronavirus in Northern Ireland.

The total number of deaths involving Covid-19 up to last Friday has now reached 2,186, according to the Nisra data.

It also reported that two dates this month – January 7th and 11th - saw the joint highest number of Covid-19 related deaths occurring in any one day since the start of the pandemic – 28 deaths.

The comparative number of deaths reported daily by the North’s Department of Health to January 15th was 1,583.

That difference of just over 600 is explained by the fact that health department figures mainly relate to deaths in hospital and patients who had previously tested positive for the virus.

Nisra’s figures go deeper, in that they relate to death certificates in the general community where Covid-19 was recorded as a factor in the death. The Nisra figures relate to people who may or may not have previously tested positive for the virus.

Further analysis by Nisra, which also considered deaths of care home residents in hospital, found that care home residents accounted for 39.2 per cent of all Covid-19 related deaths. Nisra however said that “no assumptions can be made in relation to where or when the deceased contracted the disease”.

The North’s health department in its daily bulletin on Friday afternoon recorded 12 more Covid deaths taking its total to 1,704.

Hospital bed occupancy is now 94 per cent. There are 828 patients receiving treatment with 72 in intensive care units and 52 on ventilators.

Meanwhile, Mrs Foster said she had been assured by British defence Secretary Ben Wallace on Friday that more British military aid would be provided if required to assist frontline health staff in the North deal with Covid.

“I reassured the Minister that the overwhelming majority of people in Northern Ireland welcomed the support,” she said.

And against some criticism of the decision this week to bring in more than 100 medically trained British military technicians to assist hospital staff, Ms Foster added: “I was greatly saddened by those who have criticised this deployment for intolerant political reasons. They have placed their ideology before the needs of patients. That is an appalling indictment on their motivations in public life.”

On Thursday, the Northern Executive extended the previous six-week lockdown, which was due to end on February 6th, until March 5th. On Friday, the North’s Minister for Health Robin Swann told the BBC’s Good Morning Ulster radio programme it was “unrealistic” to expect all lockdown restrictions to be lifted by March 5th.

There have been some suggestions that, such will be the health pressures, the lockdown may have to be further extended to after Easter, with Easter Sunday falling on April 4th this year.

Mr Swann said: “It would, I think, be unrealistic to think that we’d be able to lift every restriction come (March 5th) because we do see where this virus is going, the trajectory it’s taking, the large number of positive cases that we are managing, but also the large number of hospital admissions that we currently have.”