Five hospitals said to have 500 patients on trolleys this month 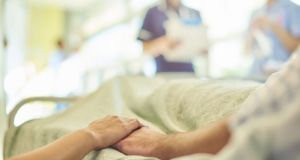 More than 9,000 patients had to wait on trolleys in emergency departments or on wards for admission to a hospital bed this month, making it the worst October on record for overcrowding, a nurses union has said.

The Irish Nurses and Midwives Organisation (INMO) said the overcrowding situation in October was now twice as bad as it was when the union began compiling data on patients on trolleys in 2006.

The INMO said University Hospital Limerick had over 1,045 patients on trolleys in October - the highest in the country.

It said this was “the equivalent of Limerick’s total bed capacity twice over”.

The INMO said five hospitals had over 500 patients on trolleys in October . These were :

The union said it was also concerned at overcrowding in smaller hospitals. It said South Tipperary General Hospital, for example, had 474 patients waiting on trolleys over the month, which is nearly three times the hospital’s total bed capacity.

The INMO argued that much of the overcrowding was due to understaffing, “caused primarily by unattractively low pay levels in Irish nursing and midwifery”.

It said according to HSE figures, as of September 2018, there were 227 fewer nurses employed in the health service than there were in December 2017.

INMO general secretary Phil Ní Sheaghdha said: “Over 9,000 patients forced to wait on trolleys and it’s not even peak winter season. Figures like these do not adequately express the hardship endured by patients who find themselves in these circumstances.

“The negative health impacts of this overcrowding are known, yet this is not addressed as a national priority.

“Our current health service simply does not have the capacity to cope. The Government accepts that we need additional beds, but we do not have a plan to tackle this daily problem. Opening extra beds requires extra nurses, but low pay means there is no immediate prospect of recruiting additional nurses or retaining current ones.”