World war fighters cannot ‘be equated’ with heroes of 1916 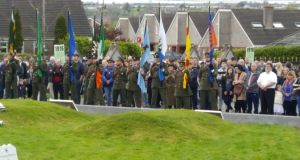 Efforts to equate the Irishmen and women who fought in World War I and World War II with those who fought for Irish freedom is hugely misguided, Sinn Féin MEP Matt Carthy has said.

“Let me just make it clear – it is important that we remember those who fought in world wars; those people who were part of the Irish nation but for whatever reason decided to wear foreign uniforms, it’s absolutely legitimate that they should be remembered and should be commemorated,” he told a Sinn Féin commemoration at the republican plot at St Finbarr’s Cemetery in Cork where lord mayors Tomas Mac Curtain and Terence Mac Swiney are buried.

However, no one should confuse the sacrifice made by those who fought for Irish freedom with those who died in foreign wars, he told the 300-strong graveside attendance people, he said..

Many people had sought to present last year’s 100th anniversary of the 1916 Easter Rising as just another in a series of events in the decade of centenaries alongside World War I commemorations.

“But in no way can they be equated to the men and women who fought for our country in the GPO and in many cases, North, South, east and west for a free and independent Ireland – these men and women are our heroes; they are national heroes with a special place in our hearts and our history.”

The men and women who fought in the Rising would not be satisfied with the current status quo where Irish citizens are “saddled” with €64 billion of private banking debt and health and housing crises.

“Some people [then] tried to insinuate they were celebrating the realisation of what the 1916 leaders sought – as if they would be happy with a partitioned Ireland – as if Tom Clarke would be satisfied to see his own native county of Tyrone annexed into a sectarian state – it’s as ludicrous as it is laughable,” said Mr Carthy.

Earlier, members of the 32 County Sovereignty Movement were joined by members of the Cork Republican Movement, Cumann na mBan, Cork and Cumman na gCailíní, Cork for a separate Easter Rising commemoration at the republican plot .

Belfast republican Alfie McAvoy told the 80-strong crowd, that recent events in Northern Ireland had shown yet again how the sovereignty of the Irish people is being denied.

“The present situation in the occupied six counties illustrates the assimilation of all the parties into provincial loyalism to Britain under the threat of direct rule from London – continue to be a loyal provincial parliament or we take it away. We rule through you, or instead of you.”

Mr McAvoy said the reality was that “a unionist minority plus direct rule threat always trumps a nationalist majority”. Since Brexit, however, and with Scotland pushing for independence, there was a much better chance of a Border poll, which was to be welcomed, he said.

Earlier in the day, the Cork branch of the Workers Party also held a commemoration at the graveyard. Here, a 30-strong crowd heard Workers Party member Karen Collins say Ireland today had many “striking similarities” to the Ireland that the men and women of 1916 sought to change.

“Today, rampant inequality caused by a class war under the name ‘austerity’ sees an unfair and unequal society – this is no accident though; this is a direct result of policies decided by a psychotic Government... working not for the benefit of all the nation but just a cohort of a specific class.”