Essex police have appealed to people who fear that a friend or family member may have been among the 39 people found dead in a truck container near London to come forward and speak to the police "without fear." 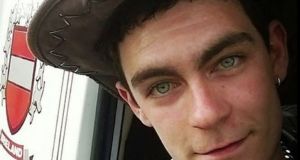 Irish truck driver Maurice Robinson (25) has been charged with 39 counts of manslaughter in connection with the deaths of 39 migrants found in a refrigerated trailer in England earlier this week.

Mr Robinson, from Co Armagh, was arrested at the scene where the bodies were found in the back of a refrigerated trailerin Essex on Wednesday.

Mr Robinson was also charged on Saturday with conspiracy to traffic people, conspiracy to assist unlawful immigration and money laundering.

He will appear at Chelmsford Magistrates’ Court on Monday.

Police in Essex have also confirmed that another Irish truck driver, a 23-year-old from Northern Ireland who was arrested at Dublin Port earlier on Saturday, is a person of interest to their investigation.

According to Garda sources, the man’s truck features as part of Essex police’s investigation.

This man was arrested on a truck coming off an ferry which docked in Dublin on Saturday.

It is understood this truck has been in France for the last three days. The man was before the courts in Dublin on unrelated charges on Saturday.

Three other Irish people are still being questioned by Essex police in connection with the deaths.

The victims are understood to include Chinese and Vietnamese nationals.

The @cpsuk have authorised charges for a 25 year-old man from N. Ireland in connection with our investigation into the deaths of 39 people whose bodies were found in #Grays.

He is due in court on Monday.

One suspect, a 48-year-old man from Northern Ireland, was arrested on Friday at Stansted Airport on suspicion of conspiracy to traffic people and manslaughter. Mr Robinson is believed to know the man who was arrested at Stensted.

Police arrested a married Irish couple, both aged 38, in Warrington, England before dawn on Friday.

The couple, who run a haulage business and beauty salon in Warrington, have one adult child and two younger children. Mr Robinson’s truck was also previously owned by the woman arrested in Warrington.

The husband and wife were arrested on suspicion of conspiracy to traffic people and the manslaughter of the 39 victims .

The woman arrested in Warrington had registered Mr Robinson’s truck to an address in Varna, Bulgaria, but when those details emerged publicly on Thursday, she told reporters had sold it 13 months ago to a firm in Ireland.

Police are investigating lines of inquiry to “establish whether there is a wider conspiracy involved,” Detective Chief Inspector Martin Pasmore said on Saturday.

The trailer in which the bodies were found is owned by an Irish company which has premises in Co Monaghan and a presence in Dublin.

It is not the same company that bought the truck from the woman arrested in Warrington.

The trailer company had leased the trailer earlier this month to an Irish trucking business based close to the Border. That lease was signed by a Ronan Hughes, who gave an address matching the business address for a haulier called C Hughes Transport. Mr Hughes is understood to be a relative of the company’s directors.

Efforts to contact the haulier on Friday were unsuccessful. There are no allegations of any wrongdoing against either the owner or the company which leased the trailer.

In Belgium, police are hunting the driver who delivered the trailer to Zeebrugge, the port it left before arriving in the UK. A spokesman from the Belgian prosecutor’s office told the PA news agency: “We’re trying to identify the driver.”

He said Belgian authorities were also working to “track the route of the container” and find anyone responsible for “collaborating with the transport”. “We would like people to be arrested as soon as possible,” he added.

The truck driver being held in Essex picked up the trailer in the early hours of Wednesday from Purfleet port before opening it and finding the bodies.

Police initially said they believed the victims were all Chinese but a number of Vietnamese families were seeking information about their missing loved ones last night amid growing fears they were among the dead.

Relatives of one woman, 26-year-old Pham Thi Tra My, told the BBC they had not been able to contact her since she sent text messages on Tuesday night saying she was suffocating.

“I am really, really sorry, Mum and Dad, my trip to a foreign land has failed,” she wrote. “I am dying, I can’t breathe. I love you very much Mum and Dad. I am sorry, Mother.”

Her family said they had paid £30,000 for her to be smuggled into Britain.

Several other families said that their loved ones had travelled via China to Europe, aiming to reach the UK, and that they had also been out of contact since early Wednesday morning, when the victims’ bodies were found in the trailer after being ferried from Belgium to Britain. – Additional reporting agencies