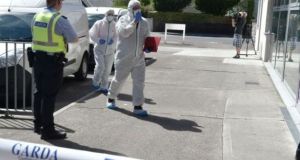 Gardai and forensic officers at the Elderwood Complex in Boreenmanna Road in Cork where the 2 year-old girl died. Photograph: Provision

A woman has been arrested in connection with the death of two-year-old girl at an apartment block in Cork city last Friday.

The woman is being held for questioning at Gurranabraher Garda station on the northside of Cork city following her arrest on Monday.

Gardai began a murder investigation after receiving the results of the postmortem. These results are not being released for operational reasons.

The body of the girl is expected to be released to the family on Wednesday. Flowers and teddies were left outside the Elderwood Complex in Boreenmanna Road where the girl was found.

She sustained bone fractures and a serious head injury. Voluntary statements have been taken from her father and his girlfriend, who is not the child’s mother.

The couple were in the apartment when the alarm was raised. Efforts were made to stabilise the girl in hospital but she died at around 9.20am last Friday.

Gardaí have conducted door to door enquiries in the area. However, they are again appealing to members of the public to come forward if they were in the apartment complex between 4pm Thursday and 6am Friday.

It is understood that gardaí have linked in with Tulsa in relation to the investigation.

Gardaí were called to the Elderwood apartment in the early hours of Friday morning following reports of noise. However, when they arrived there was no disturbance.

The alarm was raised after a man knocked on a neighbour’s door shouting that his baby girl was dead.

Prayers for the dead girl were offered at Masses in Ballinlough in Cork city over the weekend. Her

funeral arrangements have not been finalised.