Will this be the year when rural Ireland begins to bounce back? 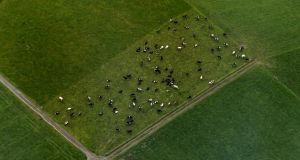 It has been estimated there will be 300,000 extra milking cows on farms here within five years. Photograph: The Irish Times

Could 2015 be the year rural Ireland begins to bounce back? Traffic on the M50 surpasses pre-recession levels, but rural towns are still waiting for green shoots. But there are reasons to be optimistic.

The ending of the milk quota regime on March 31st will be the single most important development to hit rural Ireland in a generation, according to Minister for Agriculture Simon Coveney. Global demand for dairy products is growing and, with farmers free to produce as much milk as they like, dairy processors are gearing up for expansion. Glanbia is spending more than €200 million on its new Belview facility on the Kilkenny Waterford border and that’s just one dairy processor. The ripple effects will be felt across the country as farmers expand their holdings, invest in new machinery and facilities and take on workers.

It has been estimated there will be 300,000 extra milking cows on farms here within five years. At least 3,000 more people will be needed to work on the farms. Teagasc’s agricultural courses have never been in greater demand and it is struggling to get enough teaching staff.

The expansion won’t happen overnight. Irish Rural Link chief executive Séamus Boland says there will be considerable uncertainty in the dairy sector for some time. Milk prices may collapse or soar, depending on the global market. But while everyone agrees that volatility is a given, they also agree that the long-term prospects for dairy farmers are good.

Even the bed and breakfast sector is upbeat. Some 66 per cent of B&Bs are expecting more business in the coming year and four out of five restaurants anticipate a growth in trade. The Wild Atlantic Way, which stretches from Donegal to Cork, is being credited with helping to boost visitor numbers while a plan to bring the cultural and heritage tourism assets of the south and east under one brand will soon be launched.

But there are significant challenges ahead. Research by social and economic consultant Trutz Haase has found that a key factor in determining a town’s affluence or deprivation is proximity to urban labour markets. The counties most affected by the economic decline were not within commuting distance of a major city or town.

There’s not much a rural town can do about its location but there are ways to encourage enterprise in rural areas. However Mr Boland says the closure of services continues and no action has been taken to arrest the decline of many towns and villages. “The high cost of rates and other services is also a factor in the difficulties facing businesses established and setting up in these towns,” he says.

It was hoped that the publication of a report by the Commission for the Economic Development of Rural Areas earlier this year would have started to tackle these issues by now but he says the report is being stifled. Pat Spillane, who chaired the commission, has been critical of the Government’s response to the 34 recommendations made in the report. He says it has been “treated with disdain and its recommendations have been virtually ignored”.

Minister of State for Rural Development Ann Phelan is overseeing delivery of the plan. A spokeswoman for the Department of Agriculture says Ms Phelan has chaired three meetings of the implementation group and a priority programme will be agreed early next year.

Mr Boland says there are signs some rural areas are benefiting from a slight improvement in the construction sector and there are hopes that the public sector will start recruiting. He says the Government forgot rural Ireland as it focused on solving the financial crisis. “Hopefully that will change now,” he says.