Will a shower cost €2.50 under new water charges regime?

You might need a cold shower after you read this 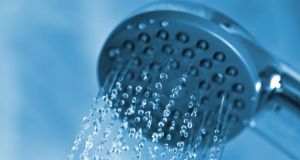 A study of the showering habits of 100 families over a 10-day period (or 2,600 showers) by multi-national consumer goods firm Unilever found that the average shower lasted for eight minutes and used 62 litres of water. Photograph: Getty Images.

You learn something new every day. On RTÉ Radio’s The John Murray Show on Wednesday, stand-in host Kathryn Thomas opened up to her listeners. “I love a long shower,” she said, during a segment on the forthcoming water charges.

Thomas’s studio guest, ecologist Duncan Stewart, warned her: “I tell you, I’m going to shock you with showers.”

And he did, kind of.

Stewart explained that an ecological shower uses about nine litres of water in three minutes and costs a fairly reasonable 4.5 cent, given water will cost almost half a cent per litre under the new charging regime.

A less ecological power shower uses about 17 litres per minute and generally lasts about 10 minutes when a teenager is involved. Stewart said teens like their showers hot, at about 45 degrees, and the routine was likely to cost €2.50 a go, which works out at more than €900 per year for one teen.

When contacted, Stewart put flesh on the bones of his statistic. He said the required water would cost about 82.96 cent (170 litres x 0.488 cent), and most of the expense arises from heating enough water to keep the shower pumping at a rate of 17 litres of hot water for 10 minutes.

A daily shower using 170 litres would account for 62,050 litres annually, which means showers for one person would use more than double the free allowance offered by Irish Water to cover a household for a year. The additional 21,000 litre allowance for under-18s would be a drop in the ocean.

There is, however, an important distinction to be made between a power shower and an electric shower.

Simon McFetridge, of Dublin shower installation and repair firm Aquashowers, said six in 10 properties he visited had an electric shower, with the Triton T90 the model he encountered most often.

On average, about two in 10 properties had a power shower, he said, but some households were moving away from them before the water charges come in.

The T90, McFetridge said, pumps at an average rate of some seven litres per minute, or 70 litres for a 10-minute shower, which would cost 34.16 cent.

Teenagers aside, a study of the showering habits of 100 families over a 10-day period (or 2,600 showers) by multinational consumer goods firm Unilever found that the average shower lasted for eight minutes and used 62 litres of water – which would cost 50.2 cent.

Perhaps it’s not just teenagers who are going to have to change their habits when the water bills start to arrive.