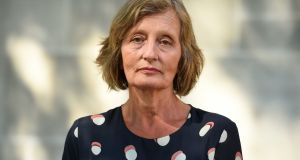 Geraldine Finucane described Sir Desmond’s 2012 report into the killing of her husband as a “whitewash”. Photograph: Kirsty O’Connor/PA Wire

The family of murdered Belfast solicitor Pat Finucane has urged the United Kingdom’s highest court to rule that a public inquiry should be held into his death.

As his widow, Geraldine, arrived at the supreme court in London on Tuesday, she said they were feeling optimistic that the five justices hearing the case would rule in their favour.

Speaking outside the court with sons John and Michael, daughter Katherine and 15-year-old grandson Piaras by her side, Mrs Finucane said they had come “for an inquiry and for justice”.

Her husband, Pat (39), was shot dead by loyalist paramilitaries in 1989 in an attack found to have involved collusion with the state.

Mr Finucane, who represented a number of high-profile republicans, was murdered in front of his wife and children at their north Belfast home.

Former prime minister David Cameron decided not to hold a public inquiry into the killing but ordered an investigation by a senior lawyer.

The review by Sir Desmond de Silva QC, a former UN war crimes prosecutor, concluded there was “no overarching state conspiracy” in the lawyer’s death but found “shocking” levels of state collusion involving the army, police and MI5.

Mrs Finucane has described Sir Desmond’s 2012 report as a “whitewash”.

In February last year, she lost her case at the Court of Appeal in Belfast when three judges dismissed her challenge to Mr Cameron’s decision to reject a public inquiry.

A panel of five supreme court justices, headed by the court’s president Lady Hale, will consider her appeal against that ruling during a two-day hearing.

Opening Mrs Finucane’s case at the supreme court, Barry Macdonald QC said the background to the proceedings was “complex and sinister”.

“The available evidence suggests that agents of the state responsible for law enforcement devised and operated a policy of extrajudicial execution, the essential feature of which was that loyalist terrorist organisations were infiltrated, resourced and manipulated in order to murder individuals identified by state agents as suitable for assassination – in other words, a policy of ‘murder by proxy’ whereby the state itself engaged in terrorism through the agency of loyalist paramilitaries.”

In written argument before the court James Eadie QC on behalf of the Secretary of State for Northern Ireland submits that the lower courts which considered the case correctly concluded that the decision-making process relating to the public inquiry was a “thorough, genuine and lawful” one.

He said the supreme court was being invited to dismiss the appeal on the basis that decisions not to establish the inquiry “were lawful as a matter of public law”, and that “no such obligation” could be derived from the Human Rights Act. – PA