Mary McAleese says she is ‘heartbroken by Brexit’

Border must remain invisible, rather than ‘frictionless’, says former president 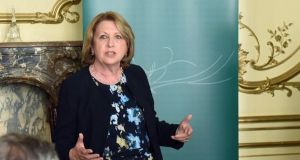 Former president Mary McAleese has described herself as heartbroken by Brexit, adding that “we’re all going to be to some extent broken by it”.

Speaking at the Irish Embassy in London, she said the Border must remain invisible, rather than “frictionless” after Britain leaves the European Union.

Ms McAleese said EU membership had not only transformed the relationship between Britain and Ireland but created diversity, solidarity and understanding within and between its member states.

“This is what the European Union has given us, an integrated human family, a diverse human family, living together, working together, meeting together, sharing together, going to school together. And somebody wants to walk away from that? To interrupt it? To say that somebody in Europe or in Brussels didn’t connect well enough with us? I’m sorry, I’m heartbroken by Brexit and I think we’re all going to be to some extent broken by it,” she said.

She rejected the suggestion that Brexit was caused by the remoteness of the European institutions and affirmed her confidence in the European project of political integration.

“I am an absolute unreconstructed supporter of the marvellous adventure in democracy of the European Union. Frankly, it’s the best idea humankind has had forever. Forever. The best idea. And I can’t believe that anybody would willingly walk away from that or so freely walk away from that. I use the word ‘disappointed’ but actually I’m utterly heartbroken that people didn’t get it,” she said.