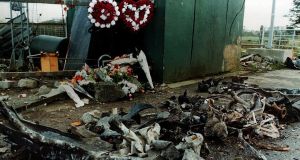 The British army checkpoint at Buncrana Road, outside Derry, where a car bomb driven by Patsy Gillespie exploded, killing him and five soldiers. Photograph: George Jackson

The widow of Patsy Gillespie, who died after he was strapped into a car and forced to drive an IRA car bomb into a British Army checkpoint, has said Martin McGuinness’s death has robbed her of the chance get to the truth.

Five British soldiers were also killed in the October 1990 attack on the Coshquin checkpoint on the Derry/Donegal border after the 1,000lb car bomb exploded.

Speaking to BBC Radio Foyle, Mr Gillespie’s widow Kathleen said she wanted to ask the former IRA leader why her husband had been considered a “legitimate target”.

“Martin McGuinness was asked specifically why Patsy Gillespie was murdered, and his words were that he was a legitimate target of war. I wanted to know why.

“I would have liked to have had a conversation with him, just to put that one question to him. I didn’t want to berate him or fight with him, I’ve gone past that stage of hatred and anger.

“ I just wanted the opportunity to ask him that question. I’ll just have to learn to live with the fact that I didn’t get to speak to him.

Speaking of her marriage to Mr Gillespie, she said: “If she loved him as much as I loved Patsy, then I give her my condolences because I know what she’s missing.”

Mr Gillespie, who was 42 when he died, had been a civilian cook at Fort George army base in Derry. He had previously been ordered to drive a vehicle containing a bomb to Fort George, but was able to stop at the gate and raise the alarm.

The IRA held Mrs Gillespie and their children hostage in their home while Mr Gillespie was tied into a car containing the explosives and ordered to drive it to the permanent British army checkpoint at Coshquin.

He was killed instantly, along with five British soldiers. Twenty seven people were injured, and the checkpoint as well as nearby homes and businesses were badly damaged.

Speaking at the time, the then bishop of Derry, Dr Edward Daly, described the Coshquin attack and the manner of Mr Gillespie’s death as “the work of the devil”.

In 2013, Mr McGuinness told the Oxford Union he did not know who was responsible for the attack and he would be unable to uncover their identities.