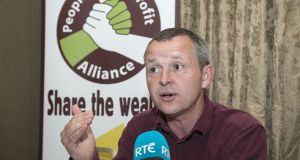 Richard Boyd Barrett: old and disabled people would not use the service at night unless the stations were adequately staffed. Photograph: Dave Meehan

He told the Dáil that old and disabled people would not use the service at night unless the stations were adequately staffed.

Mr Boyd Barrett said a suicide had been prevented at Monkstown station last year because of the presence of staff.

“Later that night, at Killiney Dart station, the life of somebody who threw themselves in front of a train was lost because staff had been removed,’’ he added.

“There have been a number of attacks around Shankill station because staff have been removed at night.’’

Minister for Transport Shane Ross said staffing levels at train stations were operational matters for Iarnród Éireann and he had no statutory function in that area.

He said he had been informed by the company that it had not introduced staffing changes at Dart stations but that the issue was under review in response to changed customer behaviour.

The company’s priorities in determining staff levels were to ensure that busier stations were manned at all times and responded to customer demands, he added.

Mr Ross said the company planned a pilot scheme to assist mobility-impaired customers and planned to recruit temporary employees to assist customers throughout the greater Dublin area during the busy summer months.

Mr Boyd Barrett said he did not want to hear the propaganda of Iarnród Éireann as it axed staff and compromised health and safety.

“To say it is not the Minister’s responsibility to ensure safety and access for elderly people and people with disabilities, and to ensure line safety and equality of access to Dart stations is, frankly, disgraceful,’’ he added.

Mr Ross said if Mr Boyd Barrett had evidence of incidents occurring at Dart stations, he would make representations to Iarnród Éireann on the matter.

He said “important and serious matters’’ had been raised by the TD.