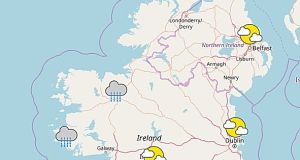 The rain is set to clear on Sunday afternoon to bring dry and bright conditions for Galway and Limerick supporters as they descend upon Croke Park for the All-Ireland senior hurling final.

Met Éireann has issued a weather warning for intense rainfall and high winds as Storm Ernesto approaches the west coast of Ireland.

“Rain moving eastwards across Ireland this evening and tonight will give heavy/intense bursts of rainfall in places for short periods with a risk of spot flooding,” Met Éireann said.

The warning was issued at 10am on Saturday and remains in place until 4am on Sunday. A status yellow gale warning is also in place.

Storm Ernesto is moving towards Ireland from the mid-Atlantic and is forecast to hit the west coast of Ireland from 8pm on Saturday, according to the US National Hurricane Center.

The national forecaster is predicting a wet night in many areas with rain widespread for a time. Met Éireann said heavy downfalls are expected in some central and northern areas but lighter showers are anticipated further south.

Most of the rain will clear eastwards overnight, leaving just scattered patches of drizzle. Temperatures of 15 to 17 degrees are likely tonight. Fresh to strong and gusty south to southwest winds over the southern half of the country will ease as the more persistent rain clears.

The good news is the rain will then clear on Sunday afternoon to bring dry and bright conditions for Galway and Limerick supporters as they descend upon Croke Park for the All-Ireland senior hurling final. Highest temperatures of 18 to 24 degrees are expected. It will be warmest in the southeast .

The warm, humid weather is expected to continue into next week with temperatures in the high teens and low twenties on Monday and Tuesday.

It will be cloudy in many areas with scattered outbreaks of rain and showers at times but also good dry periods with sunny spells. Tuesday will bring heavier rain to western parts of the country.