Bulldoze Stormont and replace it with retirement home, says McAliskey 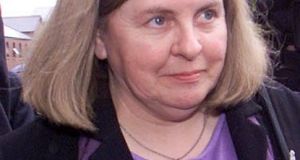 Stormont should be bulldozed and replaced with an old people’s home, Bernadette McAliskey told a conference in Dungannon on Saturday.

The veteran civil rights activist, who was speaking at a conference on Saturday to mark the 50th anniversary next week of Northern Ireland’s first civil rights march, was was cheered when she said she had “run out of patience” with “that house on the hill”.

Northern Ireland has been without a government since January 2017 when it collapsed amid a row between the DUP and Sinn Féin over a botched renewable energy scheme.

Thousands of people marched from Coalisland to Dungannon on 24th August, 1968, calling for civil rights and an end to discrimination in the allocation of housing and jobs.

Mrs McAliskey - who was on the march - said the civil rights movement had been non-sectarian, and the national question or the Border had not been part of it.

When tackling racism, she said, “the problem is not with the black community or with the Polish community, the problem is the people born and bred in Northern Ireland for 20 generations still fighting over who owns what field.”

She said people in Northern Ireland were “fundamentally racist” because “we think we know a great deal of history and we know none”.

Citing Europe’s colonial history and the role of the missions in Africa, Mrs McAliskey said: “We are the victims of sectarianism, the whole community here, and we are the beneficiaries of racism.”

“Until we have a human rights act here that enforces in local legislation the fundamental rights guaranteed under the United Nations to everybody regardless of their class, colour, creed, gender, race or political or sexual orientation - or whether they’re from a rural or urban area - we’re on a hiding to nothing challenging racism and sectarianism,” she said.