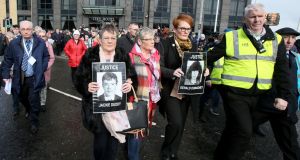 The North’s Public Prosecution Service (PPS) explained why just one former British paratrooper – Soldier F – is to be prosecuted in connection with Bloody Sunday while several other ex-soldiers found by Lord Saville’s inquiry to have been involved in the shootings are not to be charged.

In guidance prepared for the families and media the PPS examined each of the 13 killings that took place on January 30th, 1972 and the areas of the Bogside in which they happened. A fourteenth victim, John Johnston died in June that year from injuries sustained on Bloody Sunday.

Soldier F, a former lance corporal in the Parachute Regiment, is to be prosecuted for the alleged murder of James Wray (22) and William McKinney (26) and the attempted murder of Joseph Friel, Michael Quinn, Joe Mahon and Patrick O’Donnell – shootings that happened in Glenfada Park North and Abbey Park.

Soldier F and Soldier H were found by Lord Saville’s 2010 report into Bloody Sunday to have been responsible for these casualties. The PPS ruled that there were no evidence capable of proving that Soldier H fired upon entering Glenfada Park North, when the six victims were shot, “other than his own inadmissible accounts”. Therefore there was “no reasonable prospect of conviction” of Soldier H.

The PPS on the other hand found “there is a reasonable prospect of conviction of Soldier F” for two murders and two attempted murders.

The PPS said that the paratroopers reported for the potential death of John Johnston (55) and the wounding of 15-year-old Damien Donaghy near William Street were Soldier A and Soldier B. It said that neither individual posed a threat but “there was no reasonable prospect of proving to the criminal standard, based on the evidence available to the prosecution, that the soldiers may not have believed that there was a threat that justified them having fired”.

The paratroopers linked by Lord Saville to the killing of Jackie Duddy (17) and the wounding and injuring of six others in the car park at the front of the Rossville flats were Soldiers N, O, Q, R, S and V. Here the PPS said a “fundamental difficulty in relation to this sector was in attributing responsibility for the various casualties to particular soldiers”.

Again based on the admissible evidence the PPS judged there were difficulties in determining individual responsibility for some of the killings and that more generally there was no reasonable prospect of prosecution.

Here Soldier F was reported to have been connected to the killing of Michael Kelly, brother of John Kelly one of the main campaigners and spokespeople for the Bloody Sunday families. The PPS found that there was “no admissible and credible witness evidence that Soldier F fired at the rubble barricade” notwithstanding that the bullet recovered from Michael Kelly’s body was linked to a rifle used by Soldier F.

Soldier F also was implicated in the killings of Bernard “Barney” McGuigan 41) and Patrick Doherty (32) and the wounding of two other men at the rear of the Rossville flats. Lord Saville said that he was “in no doubt” that Soldier F shot Mr McGuigan and Mr Doherty. Evidence from the inquiry was inadmissible to the prosecution and the PPS said that the difficulty was “that the only evidence capable of identifying the soldier who fired the relevant shots came from Soldier F’s co-accused, Soldier G, who is deceased”.

Lord Saville’s inquiry found that deceased Soldier G was responsible for the killings of Gerard McKinney (35) and Gerald Donaghey (17) in Abbey Park. The PPS said that careful consideration was given as to whether Soldier H and, again, Soldier F, could be prosecuted “on the basis that they intentionally assisted or encouraged this shooting”.

It ruled, “However the link between their conduct and the actions of Soldier G was too remote to allow criminal charges to be brought. Furthermore, there was no admissible evidence as to exactly what they were doing at the relevant time.”

The PPS also referred to how two members of the Official IRA allegedly were involved in a sniper attack on British soldiers on Bloody Sunday in which no-one was injured. The PPS concluded “there was no reasonable prospect of conviction of two alleged paramilitary suspects reported by the PSNI”.