Who ordered the assassination that started the Civil War in Ireland? 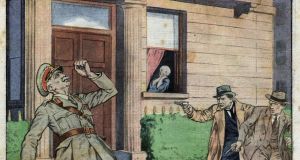 The assassination of Henry Wilson attracted international attention, with the cover of the French magazine Le Petit Journal running an artist’s impression on a 1922 edition. Image: Getty

A handwritten note in the pension file of an IRA woman based in London has shed new light on one of the great mysteries of Irish history.

The military pension file of Mary Egan, which has just been released, suggests the assassination of Wilson was planned in 1921 before the Anglo-Irish Treaty came into being.

Wilson was born and grew up on the Currygrane estate outside Edgeworthstown in Co Longford.

The note from senior IRA man Mick Murphy states: “On another occasion during my visit to London we made plans at her [Mary Egan’s] house for the shooting of Sir Henry Wilson in 1921. Same did not come off at the time on account of a murder being committed in Wilson’s area and the whole place was being held up and being watched for some time.

“Reggie Dunne and Joe Carr were also at this meeting, and Miss Egan was conversant with the whole proceedings.”

The assassination led directly to the Civil War in Ireland, and yet to this day nobody has been able to determine who ordered Wilson’s killing. He had been the chief of the Imperial General Staff during the first World War.

Under pressure from the British, Michael Collins borrowed two 18-pounder guns from the British army and shelled his old comrades in the Four Courts. This began the Civil War which would claim his life, the lives of thousands of others and divide Irish society for generations.

Staunchly anti-republican, Wilson became a Unionist MP for North Down in 1922. He had gained a degree of notoriety among nationalists for being a military adviser to the new unionist government in the North which had set up the B Specials. Wilson was blamed for the pogroms against Catholics in 1921 and 1922.

Yet, it would not have been in the interest of the Provisional Irish government set up after the treaty to assassinate Wilson. Some historians have speculated that Collins ordered the assassination of Wilson before the treaty and forgot to rescind it afterwards.

Others suggest that Dunne and O’Sullivan acted of their own accord in the belief that it would provoke the British into retaliation and unite the strands of nationalist opinion bitterly divided by the treaty.

Egan was an IRA volunteer from Cork who was sent by her work in 1919 to London, where she lived in a house in Dalston that was used for smuggling arms and as a safe house for IRA men on the run.

The letter from Murphy does not say whether the assassination was planned in her house before or after the truce, which occurred in July 1921. However, Egan said in her own witness statement that she left London for Cork after the truce.

Dunne and O’Sullivan were caught by an angry mob shortly after the shooting. Both were born and reared in London, and were British army veterans. O’Sullivan lost a leg at Ypres, but both men went on to join the IRA after the first World War.

The pair were hanged in August 1922. At their trial they were prevented from making a speech from the dock which would have explained why these British army veterans turned on the country they once fought for.

“The same principles for which we shed our blood on the battle-field of Europe led us to commit the act we are charged with.”

In 1967, Dunne and O’Sullivan’s bodies were brought to Ireland, and reburied at Deansgrange Cemetery.