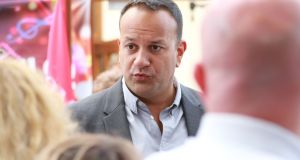 In a written response Taoiseach and Minister for Defence Leo Varadkar said that no external consultancy or legal firm had been used by his department to investigate protected disclosures. Photograph: Nick Bradshaw

Details of protected disclosures made by whistleblowers to Government departments have been given to external firms and individual consultants, it has emerged.

One Government department said it may be necessary “on occasion” to share the identity of the whistleblower but that the individual concerned would be informed of this beforehand.

The departments of defence, justice, communications and health have confirmed that they engaged external consultants to investigate protected disclosures at a total cost of €270,000.

Under current laws, a whistleblower’s anonymity must be protected except in certain circumstances such as where the individual does not object or where identification is essential for an effective investigation.

The information was released to the co-leader of the Social Democrats Catherine Murphy in a series of parliamentary questions. Ms Murphy said assurances need to be provided by the Government about the practice.

“The premise of the Protected Disclosure Act is to protect the identity of the person making the disclosure at all times. Despite departments giving assurances that this is the case, the fact is, some disclosures are being farmed out to consultancy firms to investigate,” she said.

“I would have questions around how many eyes would see the disclosure as it is passed around an external consultancy.”

In a written response, the Taoiseach and Minister for Defence Leo Varadkar said that no external consultancy or legal firm had been used by his department to investigate protected disclosures.

Mr Varadkar said that instead, “three individuals have assisted in dealing with three separate protected disclosures since 2014”. The individuals are not named but the total cost of their services was €33,000.

Ms Murphy described this as “puzzling” and called for clarification on the identities of the three.

Minister for Communications Richard Bruton said his department has engaged Byrne Wallace to provide legal expertise and to “facilitate the effective investigation” of three protected disclosures received in his department.

“On occasion, in order for an effective investigation to take place, it may be necessary to release the discloser’s identity. In this case the discloser would be advised in advance.

“Consultations with Byrne Wallace on each protected disclosure are subject to legal privilege.”

The Department of Health also spent €25,000 on external consultants to investigate three protected disclosures since 2018.

Minister for Justice Charlie Flanagan said external services have been used since 2018 to carry out independent assessments and investigations into protected disclosures.

“The external services are primarily drawn from procurement frameworks put in place by the Office of Government Procurement.”

Prior to this, he said, the assessment or investigation of disclosures was carried out by the department’s internal audit unit.

Eight disclosures have been referred for assessment or investigation to five external service providers at a cost of €187,000.

“The independent assessment determines whether the details in the disclosure meets the specific criteria to be investigated as a protected disclosure as set out in the Protected Disclosure Act 2014.

In this instance, he said there is regular communication with the whistleblower throughout the process and that the maintenance of confidentiality is a condition of the service engagement.

When serving members of An Garda Síochána make a disclosure, it is issued to a panel of counsellors who advise the Department of Justice about how the disclosure should be dealt with. Seventeen cases have been examined by members of the panel at a total cost of €3,690.

Two cases were separately examined at a cost of nearly €15,000.