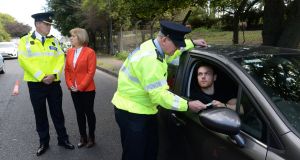 More than 1,600 vehicles have been seized from unaccompanied learner drivers since the end of last year.

They have been impounded since the Clancy law – which allows for the vehicle of an unaccompanied driver to be seized – came into force on December 22nd, 2018.

The so-called Clancy Amendment seeks to penalise car owners who knowingly allow their vehicles to be used by an unaccompanied learner driver. The new law allows the owners of these vehicles to be fined and gives gardaí the power to seize their cars if being driven by unaccompanied drivers.

It was introduced to counter the widespread disregarding of rules requiring a learner driver to be accompanied.

Garda Chief Superintendent Paul Cleary, of the Garda National Roads Policing Bureau, confirmed the latest figures at the launch of a campaign on Monday aimed at getting people off long term reliance on learner driver permits.

He said this cohort of drivers “need to get the message that the learner permit is not a full licence and that they must be accompanied while driving by a fully qualified driver”.

There are now 41,316 people on their fourth or subsequent learner permit for a car or B class licence and of these people, 8,663 are on their 10th or successive learner permit.

Gardaí mounted a checkpoint on Dublin’s Con Colbert Road on Monday focusing on learner permit-holders and ensuring compliance with learner driver regulations. After setting up the checkpoint they immediately impounded the car of a passing learner driver.

Chief Supt Cleary said the penalties for learner drivers who drive without being accompanied by a qualified driver include a fine of €80 for the offence, very often a further €60 fine for driving without L-plates, and two penalty points, rising to four on court conviction. A charge of €125 is also imposed to get the car back from the Garda pound.

In addition, motorists who allow their vehicles to be used by unaccompanied learner drivers face €2,000 fines and could be jailed for up to six months.

Meanwhile, the average waiting time for a driving test is now just over six weeks with shorter periods available in places such as Raheny in Dublin and in Sligo.

Since the start of 2018, a total of 83 new driver testers have been recruited across the driving test service. In addition, four new driving test centres opened in 2018; those looking to sit their test can now access 53 test centres nationwide.

Moyagh Murdock, chief executive of the RSA, said while there has been an 11 per cent decrease in the number of people holding a fourth or more learner permit this year, “it’s simply not enough”.

She said the practice of people continuing to drive on learner permits without ever taking a test “is unacceptable and unnecessary”.

She said the RSA, in consultation with the Department of Transport, was considering options to address this issue. “These options may include an increase in the cost of a permit; a decrease in the duration of a permit; a requirement to take mandatory lessons with an approved driving instructor, or a requirement to take a driving test before another permit can be issued for a fifth and subsequent learner permit holder.”