What will a hard Brexit mean for your pocket?

Brexit will have a wide ranging impact on your pocket from mobile phone charges to bank transfers. Conor Pope reports. 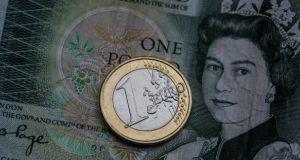 The rights of Irish consumers who buy products from UK-based traders could be significantly weakened post Brexit. Photograph: Getty

A hard Brexit it is then?

Well, there’ll be a few more twists in the road between now and whenever the UK leaves the EU but we are not in for an easy ride.

But sterling is tanking, right? That is good news for Irish consumers, right?

It is. And it isn’t. Not much more than 18 months ago, £1 would have bought you €1.45. Today it will get you €1.13. As sterling weakens against the euro things bought in that currency become much cheaper. That will make cross-Border shopping significantly more attractive and if sterling weakens more, the allure of cheaper goods in the North will widen.

What kind of bargains can I get?

An entry-level iPhone 7s in the North will set you back €818 today. Buy it south of the Border and prices start at €919.

A “Space Black” Apple Watch with a stainless steel case and a space black Milanese loop will cost €829 in Dublin compared with €794 in Belfast.

I am not in the market for a phone though? Will a weak sterling save me money on my shopping?

It should if the products you buy come in from the UK - and many of them probably do. But retailers have been slow to pass on the currency savings although they strenuously deny profiting from a weak sterling by not passing on savings . They claim to have lowered their prices across many UK-sourced lines.

So, that’s all good then?

Not really. While savings on imports from the UK are to be welcomed, lower-cost imports make things tougher for Irish brands doing business here and there.

And while it will be cheaper for people from this State to travel to the UK, the Republic will be considerably more expensive for British tourists.

Is there anything else I need to know about a hard Brexit?

Oh yes. For the best part of 100 years, people in Ireland and Britain have been able to travel between the two islands without the need for any documentation.

Theresa May said on Tuesday a a practical solution will be found to maintain the common travel area between Ireland and Northern Ireland but it is unclear how this will work.

Well that’s never good. Anything else I should be concerned about?

Sadly, yes.. If you have the misfortune to fall ill in the UK you could also feel Brexit’s sting . Under EU rules, Irish citizens can take advantage of the NHS once they have a European Health Insurance Card (Ehic).

If Britain and the EU part ways in the hardest fashion, that will most likely change, and we could be treated as international travellers and be expected to pay for our healthcare (which might help us feel like we’re at home).

No, but there’s more. The rights of Irish consumers who buy products from UK-based traders could be significantly weakened. Under EU law you have a 14 calendar-day “cooling-off” period, under which you do not have to give any reason to return the goods and seek a full refund among other rights.

While it is hardly in Britain’s interest to diminish the online shopping rights of its own citizens, if it is not adhering to EU law and directives, then protections we have now cannot be guaranteed - at least in the long term. For now it is business as usual and you have the same rights as you have always had.

What about roaming charges?

One of the most readily identifiable benefits of EU membership in recent times has been the manner in which it has put manners of mobile phone companies.

Before caps on roaming were introduced in a phased basis people were paying sky high prices for calls, texts and data. A roaming cap means operators can’t charge us more than five cent a minute for voice calls, two cent for text messages and five cent per megabyte of data.

The rule, of course, only applies when roaming with the EU. With a hard Brexit, making calls, sending texts or mindlessly scanning Facebook while doing your cross-border shopping in Newry could end up costing a pretty penny.

Sadly, yes. European legislation gives air passengers stranded or otherwise hung out to dry significant protection. Under EU regulation 261, airlines must offer passengers affected by cancellations a full refund or a rerouting on the next available flight or at a later time that suits the passenger.

If a passenger opts for a refund, the airline’s responsibility ends there. If they ask to be put on the next available flight, the airline must provide care and assistance until the affected passenger can be flown out. While the UK would probably introduce similar legislation for passengers using its airports, probably is not definitely.

Nearly. A hard Brexit could lead to a British exit from the single European payments area (Sepa), which has made electronic transfers across all Sepa states cheaper and faster and gave consumers greater control over their finances than ever before.