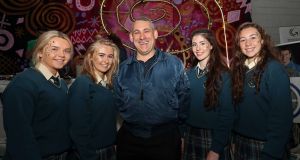 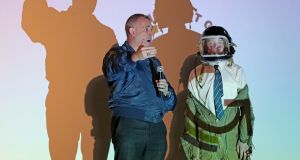 Rory Fitzpatrick, chief executive of the National Space Centre Ltd, explaining to students how lean astronaut’s need to be to travel in space, as demonstrated by the Jump Suit not fitting a second year student in Glanmire Community College. Photograph: Jim Coughlan.

It may not have been Ground Control to Major Tom but there was a spine-tingling moment when the static cleared and the pupils of Glanmire Community College in Cork could hear the voice of International Space Station astronaut Joe Acaba echoing across the universe.

The school is only the third Irish educational institution to speak directly to the ISS as it orbits around the earth and Thursday’s contact, which also involved a Romanian school, Coleguil National Calistrat Hogas in Pietre Neamt, marked the culmination of more than two years of work.

Science teacher Dan O’Sullivan said Glanmire first applied 2½ years ago to the Amateur Radio International Space Station (ARISS) programme. They learned that they had been accepted in January and preparations began in earnest.

“Some of the astronauts are real amateur radio enthusiasts so they give schools slots to communicate with the International Space Station - we heard in January that we were being given a date around October so we’ve been working hard on the project since then,” he said.

Assisting Glanmire was ARISS mentor Seamus McCague, who in addition to acting as master of ceremonies, also opened the communication to Mr Acaba, explaining to the 700 students watching in the school gym that they would have a six to nine minute window to make contact as the ISS sped overhead.

Ruth asked what it was like to sleep while floating in space, prompting an interesting reply from Mr Acaba (50).

“It’s actually very nice to sleep in space - we have a sleeping bag that you can attach to the wall or you can just sleep in your own little crew quarters - it’s super-comfortable sleeping in space,” he said.

Mr Acaba also said that astronauts recycle more than 90 per cent of their urine on the space station.

Afterwards, Ruth admitted that she was still on a high: “It was just so amazing - first all of there was so much tension that we mightn’t connect - but then it was just amazing when we got through and to get responses to all 20 questions was surreal - today, really is such an inspiration.”

The idea of connecting with the ISS serving as an inspiration to students was echoed by Mr O’Sullivan.

“We don’t know the value yet but there was absolute silence from 700 students when we connected and hopefully it will inspire some to take up careers in science and engineering.”