During a debate on decision-making powers of civil-servants at Stormont, Plaid Cymru MP Liz Saville-Roberts called on the British government to introduce legislation protecting the rights of Irish speakers. Video: Parliament Live TV 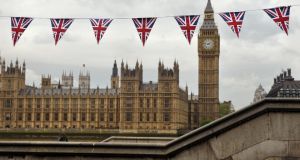 Conradh na Gaeilge has moved its campaign to Westminster where it is now seeking support from MPs for legislation that would protect the rights of Irish speakers under British law. Photograph: Getty Images

In what is believed to be a first in modern British political discourse, a Welsh member of parliament addressed the House of Commons in Irish on Wednesday.

During a debate on decision-making powers of civil-servants at Stormont, Plaid Cymru MP Liz Saville-Roberts called on the British government to introduce legislation protecting the rights of Irish speakers.

“The British government pledged to introduce an Irish language act based on the experiences of Wales and the Republic of Ireland,” she said.

“Will the minister uphold this commitment by introducing an Irish language act if power sharing institutions are not restored within six months?” she asked.

Efforts to introduce language legislation have been met with stern opposition from unionist politicians and a refusal by the DUP to sign off on a stand-alone Irish Language Act.

Called on the UK Government to uphold its commitment to introduce an Irish Language Act if power-sharing institutions are not restored within six months.

I understand this is the first time the Irish language has been spoken in the @HouseofCommons chamber.#NorthernIrelandBill pic.twitter.com/dlcEnaCR8Q

You can do anything with a degree in #CelticStudies! @LSRPlaid is a graduate of @CelticAber, and we are very proud to see her use Irish in @HouseofCommons https://t.co/Ij9MXQP8Tl

Conradh na Gaeilge has moved its campaign to Westminster where it is now seeking support from MPs for legislation that would protect the rights of Irish speakers under British law.

“Considering there already exists legislation in Wales and in Scotland, elements of which were both introduced under former Conservative Governments, we see no reason why the British Government would not act and fulfil their 2006 St Andrews promise through the implementation of an Irish Language Act based on the Welsh and Irish experiences,” said Dr Niall Comer, president of Conradh na Gaeilge.

“All we are asking is to be brought into line with the other indigenous language communities on these islands,” he added.

In 2015, the SDLP MP for Foyle Mark Durkan wished fellow parliamentarian, a happy birthday in Irish.

“Mr Deputy Speaker, you and others have made the comment that today is a day on which a birthday has occurred, so before I have to, in response to interventions, may I say to the hon. Member for Na h-Eileanan an Iar (Mr MacNeil) breithlá sona dó? Go maire sé on lá.”

Wednesday’s contribution is one of the few times Irish was spoken by a sitting MP in political debate.

Reporting on his speech at the time, the Pall Mall Gazette proclaimed: “Mr Thomas O’Donnell rose in the House last night to make his maiden speech, and addressed the Speaker in the Erse language. As a joke it was the feeblest performance that even Mr O’Donnell can have perpetrated, and by this time he ought to be consumed by his own blushes.”

“When the Speaker refused to listen to Mr O’Donnell, even after his leader had pleaded for him to be allowed to speak in the language he knew best, Mr (John) Redmond advised his follower to refuse to speak in English if he was forbidden to speak in Erse. So Mr O’Donnell shut his lips with a snap, and the House won’t hear him talk this side of Christmas. It is a small mercy, but not to be despised. As for Mr Redmond, if he would restore himself to our favour let him give similar advice to the rest of his party.”

* A headline on an earlier version of this story stated that Wednesday was the first time Irish was spoken during a debate in the House of Commons in 100 years. The SDLP press office has informed The Irish Times that Mr Mark Durkan, then MP for Foyle, spoke in Irish during a 2015 debate.